Jazz fans will get a pre-festival treat at this year's final Sounds On Centre concert on Friday, September 30, 6PM to 8PM 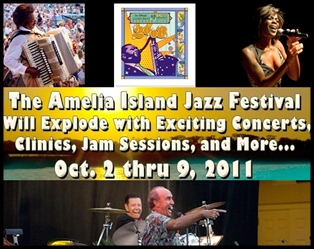 Jazz fans will get a pre-festival treat at this year’s final Sounds On Centre concert on Friday, September 30, 6PM to 8PM, when the Les DeMerle Jazz All Stars, featuring vocalist Bonnie Eisele, hit the stage at the corner of 2nd street and Centre. This show, which will also feature TGIF, the U.S. Navy Dixieland band, will mark the first island appearance for DeMerle and Eisele since their recent return from a three month engagement on the Celebrity Equinox cruise ship in the Mediterranean which took them through multiple stops in Italy, Greece, and Turkey. “We played every night on the ship and jammed with several of the natives in some very remote locations, so we are definitely warmed up for an exciting Jazz Festival week,” said DeMerle, the event’s Artistic Director.

The 2011 edition of the Amelia Island Jazz Festival, scheduled for October 2-9, will officially kickoff Sunday with its traditional free concert in Amelia Park, presenting VIP, the hot 9-Piece U.S. Navy jazz unit. Jazz at the Movies will take place Tuesday evening, 7PM, at the Hampton Inn at the Marina downtown and will screen the classic concert documentary, JAZZ ON A SUMMER’S DAY about the 1958 Newport Jazz Festival, which starred Louis Armstrong, Anita O’Day, Thelonious Monk, Chuck Berry and many more.

Blues returns to town Wednesday night for Red, White, and Blues, a combined show and wine tasting at Sandy Bottoms with the torrid jump blues combo, Toots Lorraine and the Traffic, who will be making their Fernandina Beach debut. The band has amassed a strong regional following based on a focused blend of classic West Coast Blues, Blue-Note Jazz and Swing. “Toots really knows how to deliver that energetic jump blues and an overall foot stomping type of show,” said DeMerle. The newly expanded St. Peters Episcopal Church courtyard setting will be the backdrop for shows beginning on Thursday, October 6, with Latin Night, a concert and dance presenting ever popular Jacksonville rhythm masters, Impacto Latino, in a tribute to Tito Puente and Santana. For those who enjoy working out on the dance floor, this show is a must.

The festival will close on Sunday, October 9, with two special Dixieland Jazz brunch seatings at the Beech Street Grill featuring music by the Spare Rib Six.

Additionally, during this past week DeMerle and Eisele have been presenting jazz education programs for seniors at Savannah Grand and for students at several middle and high schools in Yulee and Fernandina Beach. “We get a big kick out of sharing our knowledge of the genre with so many interested kids. It is very gratifying and loads of fun,” DeMerle noted.

Tickets for all shows may now be purchased at The UPS Store – 1417 Sadler Road (Next to Publix) 904/277-0820 or online from the AIJF website: www.ameliaislandjazzfestival.com