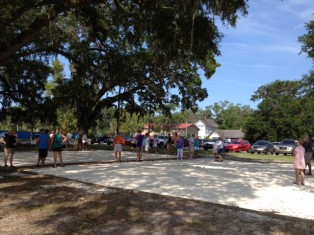 AIBC members play at various locations around the island

Less than 4 years after Philippe Boets moved his company Pétanque America from Greensboro NC to Fernandina Beach, The Amelia Island Boules Club (AIBC) ranks as the largest Pétanque Club in the USA.

Prior to his arrival, the French Provençal game of Pétanque was virtually unknown here on our shores. But a week from now, on November 8, 9 and 10, we’re looking at the 4th edition of what in a short few years has become the largest Pétanque Tournament in the USA with 260 competitors (in teams of two) flying or driving in from 20 states in the Nation and 10 countries in the world, to compete in the 2012 Pétanque America Open.

“Three years ago, hardly anyone on the island had ever heard of the game. Now 14 teams from the Amelia Island Boules Club are in training and all set to compete against the visitors. That’s exactly what I was hoping for when I first saw the downtown waterfront: boats, breeze, sunshine and a huge open space. The perfect spot to play pétanque!” said Philippe Boets, president & founder of Pétanque America. Adding that “the game has rapidly become very popular on the island, year-round.

That our little island has now the largest Pétanque Club in the nation will become official next week when the Federation of Pétanque USA officials will be on island for the Pétanque America Open. At SearchAmelia we’re are happy and honored to have been there at the beginning when Philippe came down on a cold but sunny weekend in January 2009 to come and check out our island, and now with lifting the Amelia Island Boules Club over the last little hurdle to become the largest club in the USA. What a magnificent ride!

Preliminary rounds start on Saturday morning, along the Fernandina Marina at the downtown waterfront, with finals scheduled for late Sunday afternoon. Competition for the $7,500 purse will be stiff and guarantee spectacular performances by players of all ages, from novices to champions. The field of competitors this year has not only several members of the actual USA national team, that just returned from the World Championships in Marseille, France, it also includes three previous world champions – Marco Foyot and Damien Hureau (France) and Claudy Weibel (Belgium). 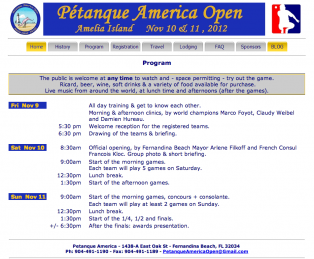 In the 2009 tournament we had the great pleasure to watch Belgian born Claudy Weibel take the top spot in the tournament with some incredible shooting and last year winner Marco Foyot gave us all a glimpse of what pure talent and lots of practice can accomplish in this game.

The community is welcome all weekend, free of charge, to watch and try out the game around the tournament grounds. Equipment will be made available by Pétanque America, with players of the Amelia Island Boules Club eager to teach.

Another great attraction ill be to watch the world champions hold clinics and demonstrations on Friday, with proceeds going to ‘Communities in Schools’ – Nassau County.

And the tournament site, downtown on the Marina Parking lot, will serve a variety of food, beer and wine bar and live music from around the world. New this year is a market place to replicate the village atmosphere that goes hand in hand with the game. To complement the French experience, Ricard pastis, the anise flavored drink so typical of the South of France is available on the spot, as well as at bars and restaurants downtown.

For those who have heard about the game, but don’t know what the fuss is all about:

Pétanque originated in the Provence of Southern France in the early 1900’s as a simplified version of an older outdoor bowling game. The aim is to toss, or roll a number of hollow metal balls (“boules”) as close as possible to a small wooden target ball (cocoon or piglet). Players take turns and the team that ends up nearest to the target ball when all balls are played, wins. No special skill is required, seniors can play with children, the equipment is inexpensive. The game is simple, fun, relaxing yet competitive, and a perfect way to make new friends. Over the past 20 years its popularity has grown worldwide, with national leagues in 95 countries. 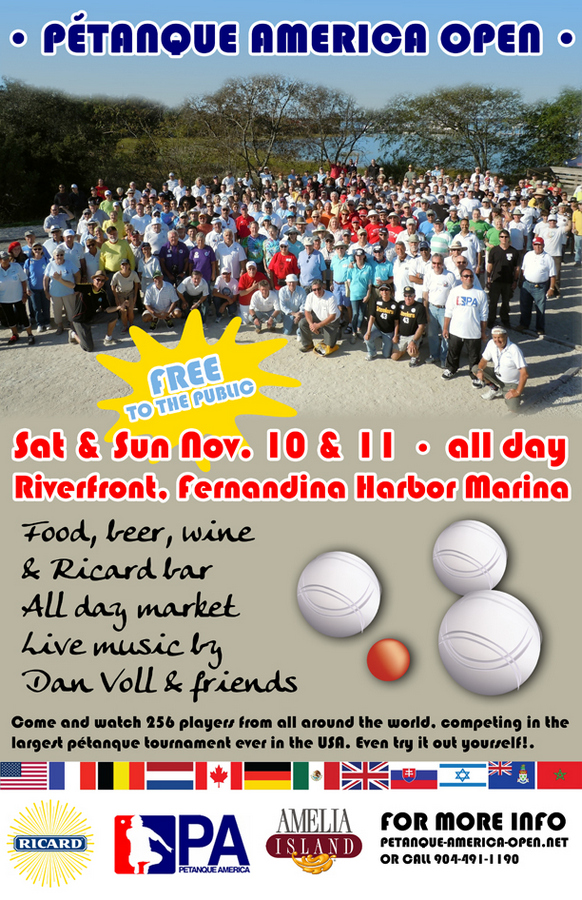