Nautical and Marinas, Why Amelia Island

Amelia Island has a rich maritime history dating back to the days of Black Beard and tall sailing ships.

Amelia Island has a rich maritime history dating back to the days of Black Beard and tall sailing ships. These pirates of yesterday made frequent stops on Amelia Island and many believe they left behind buried treasures on our small Island. Although little has been found in the way of these riches our history has been recorded and Amelia Island will forever be known as an island with strong pirate ties.

Today this is still the case, but not with the old pirate ways of the past pillaging and robbing everything in site. No, the new modern day pirates of Amelia Island are better known as marine salvagers and just like the pirates of yesterday these modern day salvagers still house treasures on Amelia Island.

On July 25, 1956, the luxury passenger ship Andrea Doria was steaming off the coast of Nantucket headed for the port of New York. Also in the general vicinity on this same date was the MS Stockholm outbound in the same shipping lane. Due to heavy fog and inexperience in the use of a new navigational tool known as radar the two ships collided causing a fatal blow to the Andrea Doria. The ship sank 11 hours after the collision 60 miles off the coast of New York in 300 feet of water. 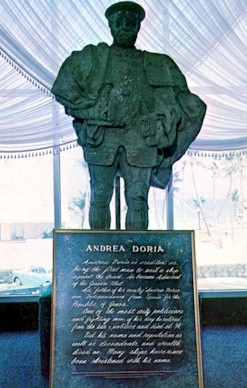 An Amelia Island local named Dan Turner, an accomplished marine salvager rounded up his crew and headed for the site. In hopes of locating the purser’s safe, Turner spent months in preparations and diving excursions to the bottom of the cold north Atlantic wreck site. The safe was not recovered by Turner and his crew, however they managed to capture a most unique artifact, a bronze life sized statue of Admiral Andrea Doria himself. This statue graced the main ballroom of the ship making the task of extricating it very extensive and labor intensive. Many dives later, the statue was raised to the surface to see the light of day once again.

The statue of Admiral Andrea Doria was returned to Amelia Island where it has remained for several years. I personally had the rare opportunity to pay a visit with Captain Dan Turner and see the statue of Admiral Andrea Doria up close and in person. This was an experience I will not soon forget as I was not only in the presence of a rare artifact recovered from the depths of the sea, but to have a conversation with the person responsible for its existence at the same time was very moving.

Today, the Admiral has departed Amelia Island temporarily and is currently on tour in Italy to be shared with the country that once owned the great ocean liner Andrea Doria, named after the Admiral. As for Amelia Island, our rich and colorful history continues as an island where treasures from the sea end up.