Take the Kids fishing to encounter and embrace nature up close creating memories for a lifetime - you may even boat a sailfish! 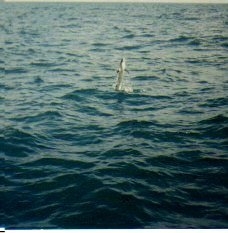 The wind is whipping and the thermometer barely registers 50 degrees. Outside of bagging a few Bass working a plastic worm at a snails pace off the dock in my backyard, only the crabbers and shrimpers are bold enough to be on the water today. With colder weather on the way it may be awhile before water temps and wind conditions allow me to get out.

Last week provided some exceptional offshore fishing for those lucky enough to be able to reach the Elton bottom and the gulfstream waters some 70 miles offshore of Amelia Island. Local seasoned veterans know that winter and springtime provide some of the best Wahoo, Dolphin, Tuna and even Sailfish action to be found anywhere. Due to the distance and weather conditions this time of year there is little pressure on this vast and truly world class fishery.

Speaking of Sailfish and warm weather, I recall a fishing trip several summers ago late in July involving myself and Lawrence Mackie plying the waters only some seven miles off Cumberland Island. We were slow trolling live Menhaden (pogies) in search of King Mackeral. This area known as “KBY” has manmade structure consisting of concrete rubble dumped there during the construction of the Kings Bay Naval Base as well as a sunken barge and tugboat spread out over a large area. We secured a live-well full of Menhaden along the Cumberland Island shore and shortly thereafter we were trolling live baits and chumming following a pattern that went from one pile of rubble to another as indicated on our fishfinder. Almost like clockwork as we passed over an area of stucture one of the trollong rods would go off ZZZZZZZZZZZZZZZZZZZZZZ, screaming reels and bent rods provided solid action from Jack Crevalle, Barracuda, Sharks, Bonito and even our targeted species King Mackeral. We had two “smoker” size Kingfish gaffed and resting quietly in the fishbox. We were pulling in lines to try fishing another nearby rubble pile when we got lazy and decided to leave two lines out for our short run, allowing the baits to skip along on the surface. As the boat was just shy of coming up on plane one of the rods left trolling doubled over and I asked Lawrence if we were snagged on something when a sailfish began cartwheeling in our boat wake. 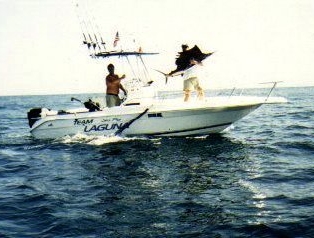 We yelled, “Sailfish!” at the same time and Lawrence grabbed the rod while I slowed the boat just slightly to keep pressure on the leaping fish. I reached for a camara and as I began snapping off pictures the film emerged from the camara and fell to the boat floor. Only one frame had advanced far enough to be salvaged showing the sailfish bill poking up out of the water.

We boated the Sail and released her unharmed high five-ing and celebrating our eventful day. As we trolled over the same area another larger Sailfish took our bait and performed spectacularly. To our amazement we had two Sails in one day.

Fortunately we had been corresponding with another fishing boat via the VHF radio regarding our sailfish encounter and being in the area they motored over and took some pictures of the second Sail after it had been boated. It too was revived and released unharmed. What a day! 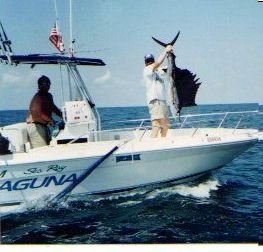 Notably we had spotted numerous Flying fish in the area and they may have been the key to catching Sailfish so close to shore. Similarly I once caught Dolphin (Mahi Mahi, not Flipper) at the Nassau Live Bottom only four miles off the south end of the island and Flying fish were present that day as well.

We have an amazing fishery here in the waters of Northeast Florida. Lets enjoy it and be conservative with its bounty but also keep abreast of the many government regulations and restrictions aimed at severely restricting our right to catch and keep fish. Take the Kids fishing and they will encounter and embrace nature up close creating memories for a lifetime. Memories not formed by a cell phone or computer, but by being there and learning first hand about our natural world.

Call me for a truly memorable day on the water surrounding Amelia Island!