American Legion Post 54 Open to the Public this Weekend

Here is a chance show gratitude to the Veterans for their sacrifices and mingle with them on the Open to Public Independence Day celebrations at the American Legion. 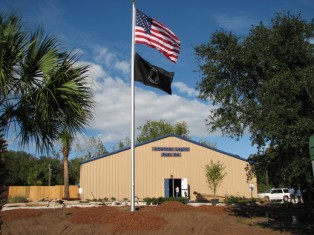 On Saturday night the local American Legion Post 54 is open to the public for an evening of Rock, Blues and Folk Pop with local duo “Evolution”.
Since the legion moved from their Atlantic location to its new home on the westend of Gum St. and Third in Downtown, people have often wondered about the facility. On Saturday evening, Sunday and Monday July 4th, on the occasion of Independence Day Weekend, the American Legion invites friends and neighbors over to come party with them.
With a full bar, food (hot dogs, burgers etc.) and live music from the 60s, 70s and 80s by Evolution, two “veterans” with music in their veins, the night will be one of great atmosphere and sing-a-longs to the best tunes from the past.

After an absence of almost 2 years, Dave Ferraro and Han Ramakers joined forces again earlier this year and have been playing originals and covers around town in locales such as Café Karibo, Green Turtle, Florida House, Kelly’s Courtyard etc. This Saturday evening, July 2nd. they’ll be performing for our veterans and the public from 7-11pm.

The Legion has a history dating back to 1939 when Rayonier, which opened its Fernandina mill in 1938, donated the logs to construct the cabin. It served various purposes until around 1943, when the American Legion took it over.
At first, veterans of World War I, the Spanish-American War, the Indian Wars and perhaps even the Civil War gathered there. Today, it’s veterans of World War II and the Korean, Vietnam and Gulf wars.
When the Legion grew beyond 300 members around 2007, plans were developed and financing attracted to build the new facility that will now be open to the Public this Independence Day Weekend.

So come with friends and family and enjoy an Evening at the Legion with Evolution.