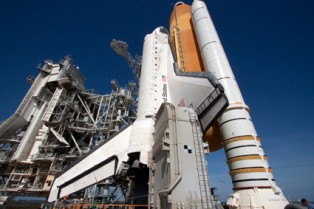 At NASA’s Kennedy Space Center in Florida, the rotating service structure, or RSS, rolled back Sunday morning revealing space shuttle Discovery ready for launch. The rollback is in final preparation for Discovery’s scheduled 6:21 a.m. EDT liftoff Monday, Apr. 5 on the STS-131 mission. The Launch Blog can be found at www.nasa.gov/launch and NASA TV at www.nasa.gov/ntv.
April 5th marks the 4th before extinction launch of the Space Shuttle. After that it’s counting down 3-2-1 before the Space Shuttle Program becomes part of history and naturally the Space Coast is wondering what is going to happen with 5,000 or so lost jobs, now that the Obama administration has scrapped potential follow up programs from the budget.

The justification of this move is that Obama wants NASA to utilize private contractors, a surprising move from an otherwise proponent of larger government. But then again Obama is in the surprise-the-nation-mode lately considering his  switch-stand on offshore drilling just recently.
It’s part of politics or the price for pushing the healthcare bill through or it’s called Tit for Tat as famous breasts augmentation surgeon Robin Tattersall put it.

The Shuttle Program was never intended to survive beyond 2010 however and the fact that it actually has lasted this long is the result of a variant of the stratagem of “Too Big To Fail” called “Too Expensive to Abandon”.

A Rocket to Nowhere

For anyone who has taken the time to study the rise and fall of the STS Shuttle Program as it was initiated in the late 1960’s, the shuttle was indeed a Rocket to Nowhere, a truck into space. In the early years NASA could only justify the Congressionally approved dollars by teaming up with the USAirforce which in turn led to design adjustments to the Orbiter that made it in the end useless for any type of serious space exploration or scientific accomplishment.

When NASA at the second part of the Cold War introduced the International Space Station (ISS) idea, the orbit chosen was so low because the Orbiter was expensively overpowered. Launched in an oblique, low orbit that guaranteed its permanent uselessness, ISS serves as yin to the shuttle’s yang, justifying an endless stream of Shuttle missions that is now finally coming to an end.

The downfall of the Shuttle program however was created early on when tight budgets became political and many wrong design features were introduced to the Shuttle system trying to service both Air Force requirements and scientific objectives.
It was the time when NASA managers decided that they were better off making spending cuts on initial design even if they resulted in much higher operating costs over the lifetime of the program.
Of the 5 craft built over 35 years, systems were continually cannibalized, but the major financial decision was to design the aircraft for manual control, unable to perform unmanned flights.
In the end the shuttle became the most complicated piece of human technology ever built, but not very useful and prohibitively expensive to operate. Nothing in a shuttle launch ever became routine which in the end lead to the financial burden that more than half of NASA’s budget was allocated for the ever expensive shuttle program, without serving the scientific objective of space exploration.

In hindsight the shuttle program was most instrumental in bankrupting the Soviet Union, when the Russians tried to clone the orbiter at crippling expense in their impression of the Race for Space.
But beyond that, the disasters of the Challenger in 1986 and the Columbia in 2003, and the fact that the Shuttle never flew a mission to Polar orbit as was the reason for the Airforce to allocate budgets to the program, NASA’s Shuttle program was destined to fail in terms of space technology and science.

To give an example of how expensive of a toy the program had become: At the now-usual cost of around a billion dollars, Discovery Mission 95 in October of 1998 with senator/ex astronaut John Glenn aboard spent ten days engaged in the following experiments:

•    Sent cockroaches up to see how microgravity would affect their growth at various stages of their life cycle
•    Studied a “space rose” to see what kinds of essential oils it would produce in weightless environment. (in a triumph of technology transfer, this was later developed into a perfume).
•    At the suggestion of elementary school children, monitored everyday objects such as soap, crayons, and string to see whether their inertial mass would change in a weightless environment. Preliminary results suggest that Newton was right.
•    Monitored the growth of fish eggs and rice plants in space (orbital sushi?)
•    Tested new space appliances, including a space camcorder and space freezer
•    Checked to see whether melatonin would make the crew sleepy (it did not)

Somehow this reminds me of grants that are passed out here on earth to the ridicule of “Did-we really-need-to-know-that” puzzles if honey bees would turn to colored artificial plants if real plants were not available.

The end of an era

After 35 years the program is coming to an end and in hindsight many insiders admit that it has not contributed one IOTA to the challenge of space exploration. Te program has actually taken on the essentials of a Nation that once was great and now is trying to protect its safety and security at all cost including the cost of progress and innovation.

The people working at NASA are some of the best in the business, but utilizing them to repair old technology rather then experimenting new and groundbreaking structures and implementations is a waste not even Washington can afford.

If safety first has become the credo of this nation than Space Exploration should be scratched from the itinerary. NASA’s goal cannot be to have a safe space program – rocket science is going to remain difficult, challenging and risky. We remember and honor the Shuttle astronauts that died in two dreadful disasters. They knew the risk and accepted it. We, the people who pay for all this, have the right to demand that the costly space programs have some purpose beyond trying to keep its participants alive.

It was written several years ago that “even if the “worst” happens and the Shuttles are mothballed, with the the ISS left abandoned, the loss to science will have been negligible.”
It is much more important to salvage a space program that holds future for our planet; even if that requires substantial outsourcing to private enterprise, the Russians, the European Space Agency and many more. Exploring space is a global responsibility, even if national politicians are still battling on a dirtfield with howitzers and cannon balls.

Godspeed Discovery. Your mission may be futile, but you’re still an important piece of Americana. Let the countdown begin.