The Amernet quickly rose to international attention after their first season, winning the gold medal at the Tokyo International Music Competition. 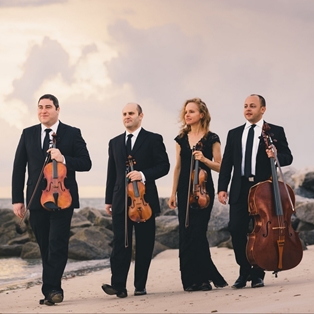 The winter season of the Amelia Island Chamber Music Festival continues in mid-February with performances by two outstanding ensembles: the highly acclaimed Amernet String Quartet on February 10, (followed by a lunchtime concert on February 12 by the Christiania Trio.)

The Amernet String Quartet, lauded for their “immensely satisfying” playing by the New York Times, will perform at 7:30 p.m. on February 10. Their show, A Grand Tour of Europe featuring works of Wolf, Goldmark and Chausson, will be held at Prince of Peace Lutheran Church, 2600 Atlantic Avenue in Fernandina Beach. The tickets are $40 per person.

The group has garnered worldwide praise and recognition as one of today’s exceptional string quartets. Ensemble-in-Residence at Florida International University in Miami since 2004, the group was formed in 1991 while its founding members were students at the Juilliard School. The Amernet quickly rose to international attention after their first season, winning the gold medal at the Tokyo International Music Competition. The ensemble was subsequently named first prize winners of the prestigious Banff International String Quartet Competition.

The Amernet’s busy performance schedule has taken the quartet around the globe. The group has collaborated with many of today’s most prominent artists and ensembles, including the Tokyo, St. Lawrence, and Ying quartets as well as Shmuel Ashkenasi, Robert deMaine, Andres Diaz, Roberto Diaz and Valentina Lisitsa. Among the Amernet’s notable engagements have been appearances at Ravinia, Lincoln Center and many festivals, including Mostly Mozart and Lucerne.

Tickets for these and other upcoming performances are available at www.aicmf.com or by calling 904-261-1779.