Bernanke gets off easy at House Financial Services Hearing yesterday as monetary policy is ignored in favor of politics. 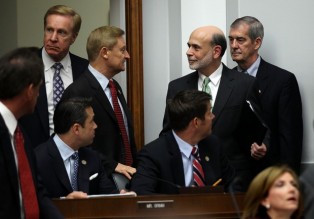 Bernanke looks more at ease everytime I see him

In the middle of the summer most people cannot muster any excitement for what happens in Washington and focus rather on beach pleasures, around the grill conversations and trips to Disney World. I can’t blame them because Washington these days is a bit like the latest Harry Potter movie, but with a lot less excitement.
There are plenty of warlocks, witches, and trolls present – and many fairy tales are told, but somehow in the summertime these tales unveil the poor intellectual level of our politicians. Yes believe it or not, but it was too hot and humid for me to go outside yesterday so I preferred my air conditioned office where I turned the TV set to C-Span while working on some client websites. I became the “victim” of an almost 3-hour House Financial Services Hearing with Fed Chairman Ben Bernanke.

Now personally I think that Bernanke is quickly sealing our monetary fate as a world reserve currency, so I was hoping to see him get grilled to well done with several layers of jalapeña powder. No such luck however. Considering what’s going around the globe in monetary policy matters these days, you would think these committee members would have no problem thinking up a bunch of really interesting questions about interest rate hikes in the world vs extremely low rates in the US, his apparent positive approach to another major stimulus program (Quantitative Easing 3 or QE3), the Greek Crisis and much more.

But no….our congressmen at large decided to make it political and failed to grill Helicopter Ben on the topics he is responsible for and instead squandered this rare opportunity with questions about raising the debt ceiling and the potential consequences. Important? Yes or maybe, but besides the fact that this maybe better left to its own political debate, it is not what Bernanke and the Fed is responsible for.

As a result, almost the entire hearing focused on fiscal policy rather than monetary policy. Many congressmen just wanted to hear themselves speak, share their best one-liners, and recount stories from their districts. The Democrats tried to bait Bernanke into stating that higher taxes were necessary and cuts were particularly bad for jobs and the Republicans tried to get him to endorse immediate cuts now.

Now Bernanke may be bad for this country’s financial future, but that does not make him stupid. He got off by simply not budging. The representatives asked the same questions over and over. Bernanke responded in pretty much the same way every time: These are fiscal issues for Congress to figure out, not the Fed. Very disappointing.

The only one whose comments I actually liked was freshman Republican congress man Sean Duffy from Wisconsin, who pointed out that uncertainty is actually hindering job growth. Uncertainty about healthcare laws, inflation, future interest rates, regulations, and the growing debt burden are impeding progress. And he also prodded Bernanke on printing more money, to which Bernanke admitted that QE3 is NOT off the table.

In all of three hours he was the only one who brought up QE3 and Bernanke’s ensuing answer shook up Wall Street and markets around the world. Yes we’re living in volatile times.
Another thing that disappointed me was, that even though these politicians tried to get Bernanke’s stand on Raising the Debt Ceiling by August 2nd, in order for the government to constitutionally borrow more money to continue “operations”, no one came out to discuss how the government has been paying its bills since May 15 when the constitutional debt limit was reached.

If you have no clue, I’ll tell you tomorrow as it is promising to be another hot humid day here in Northeast Florida.