Cocktails, In the News, Lifestyle, Shopping 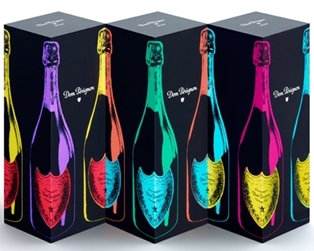 A common story told by Andy Warhol was about Dom Pérignon, when he and his friends founded the 2,000 club. This group of 20 people got together and purchased 2,000 bottles of Dom Pérignon to store, with plans of drinking them together to celebrate the New Millennium. Insiders say the running joke was who would be around to drink it. Sadly, Warhol passed away before the year 2000 and wasn’t there to ring in the new year by helping to pop 2,000 bottles of Dom Pérignon champagne.

As a tribute to one of the most influential artists in Pop Culture, Dom Pérignon has released a limited run edition of champagne inspired by the Andy Warhol Foundation with help from the Design Laboratory at Central St. Martin’s School of Art.

In timeless Warhol fashion, silk screen touches have been adopted in three colors – red, blue and yellow for this collection of vintage Dom Pérignon.

The Andy Warhol Dom Pérignon is available at both Amelia Liquors locations in Fernandina Beach, Florida for only $129.99 and this includes the gift pack with two Dom Pérignon champagne flutes. For more information or to see this stunning bottle visit either their North Store, in the Publix Shopping Center at Sadler Road and 14th Street; or their South Store, next to the Harris Teeter Grocery Store.

Here is a short video created for this collaborative collection.