The death of Common Sense triggered another death announcement... the paper book. although still early in the game, the writing is on the wall. 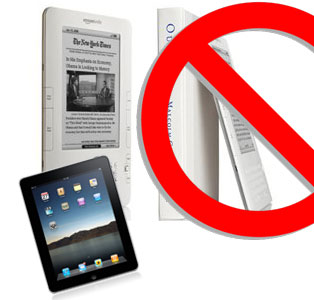 Although still premature for publishing, the writing is on the wall. Literally!

Amazon, The world’s largest book retailer online, announced that the month of May has been the third month in a row that e-books outsold “paperbacks” and that the margins are growing by leaps and bounds.

What was only a short 6 months ago a “Christmas Fluke” – e-Books outselling paper versions – has now become a steadily growing margin that for every 100 paper books Amazon sells 180 e-Books.

Of course the lowering of the Kindle reader from $260 to $190 has contributed and tripled the device’s sales according to Jeff Bezos, CEO Amazon, yet the online retailer has also taken every precaution to provide e-Books via Apple iPad apps, Microsoft windows format as well as a droid version being readied for release to stave off a possible device swing that may put their e-Book reader Kindle in a tight spot.

Notably the iPad has not yet taken the pole position in the e-Book reader class, but we haven’t seen the “back to school” reports that may show a significant surge towards the educational device of choice – rather the logging around 40 pounds of paper books a 1.5 Lbs tablet may show the real alternative – and become also a Kindle e-Book reader competitor by true force.

Time will tell, however no matter which e-readers will survive and become leaders in the e-Book class, the paper versions are doomed in the near future as declining printruns (the amount of printed copies required to satisfy the paper book market) will make the hardcover version financially obsolete.

What do you think? Let us know you opinion.