Here is another example of an arrogant senator who has lost sight of ‚ÄúWe the People‚Äù for a more popular Washington stance of ‚ÄúMe.‚Äù 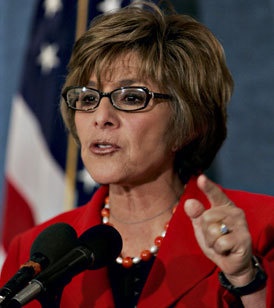 Here is another example of an arrogant senator who has lost sight of ‚ÄúWe the People‚Äù for a more popular Washington stance of ‚ÄúMe.‚Äù

The 16 second video says it all! Barbara Boxer (CA) admonished a brigadier general because he addressed her as “ma’am” and not “Senator” before a Senate hearing.

Following the short video clip is a letter being circulated and recommended for reading in response to Boxer‚Äôs comment that I (no surprise to our regular viewers) received from my 89 year old grandmother.

You were so right on when you scolded the general on TV for using the term, “ma’am,” instead of ‚ÄúSenator”. After all, in the military, ‚Äúma’am” is a term of respect when addressing a female of superior rank or position. The general was totally wrong. You are not a person of superior rank or position. You are a member of one of the world’s most corrupt organizations, the U.S. Senate, equaled only by the U.S. House of Representatives.

Congress is a cesspool of liars, thieves, inside traders, traitors, drunks (one who killed a staffer, yet is still revered), criminals, and other low level swine who, as individuals (not all, but many), will do anything to enhance their lives, fortunes and power, all at the expense of the People of the United States and its Constitution, in order to be continually re-elected. Many democrats even want American troops killed by releasing photographs. How many of you could honestly say, “We pledge our lives, our fortunes and our sacred honor”? None? One? Two?

Your reaction to the general shows several things. First is your abysmal ignorance of all things military. Your treatment of the general shows you to be an elitist of the worst kind. When the general entered the military (as most of us who served) he wrote the government a blank check, offering his life to protect your derriere, now safely and comfortably ensconced in a 20 thousand dollar leather chair, paid for by the general’s taxes. You repaid him for this by humiliating him in front of millions.

Second is your puerile character, lack of sophistication, and arrogance which borders on the hubristic. This display of brattish behavior shows you to be a virago, termagant, harridan, nag, scold or shrew, unfit for your position, regardless of the support of the unwashed, uneducated masses who have made California into the laughing stock of the nation.

What I am writing, Senator, are the same thoughts countless millions of Americans have toward Congress, but who lack the energy, ability or time to convey them. Under the democrats, some don’t even have the 44 cents to buy the stamp. Regardless of their thoughts, most realize that politicians are pretty much the same, and will vote for the one who will bring home the most bacon, even if they do consider how corrupt that person is. Lord Acton (1834 – 1902) so aptly charged, “Power tends to corrupt and absolute power corrupts absolutely.” Unbeknownst to you and your colleagues, “Mr. Power‚Äù has had his way with all of you, and we are all the worse for it.

Finally Senator, I, too, have a title. It is “Right Wing Extremist Potential Terrorist Threat.” It is not of my choosing, but was given to me by your Secretary of Homeland Security, Janet Napolitano. And you were offended by ‚Äúma’am”?