A deceased man was found in the surf in the 700 block of North Ocean Avenue near Beach Access #9N in Fernandina Beach. 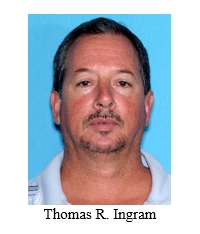 Fernandina Beach, FL – The Fernandina Beach Police Department responded to a disturbance call involving three men at 857 Robin Hood Drive in unincorporated Nassau County at approximately 11:30 PM last night. Two of the men left the area, while one chose to retire to his bedroom.

The resident woke to find the trailer ablaze and was able to escape without injury. Police and fire department personnel were called to the fire at 1:49 AM this morning. The fire engulfed the trailer and was determined to be a total loss.

The State Fire Marshal’s Office also responded and determined that the fire was intentionally set and classified the fire as arson.

At approximately 6:20 AM a deceased man was found in the surf in the 700 block of North Ocean Avenue near Beach Access #9N. The individual has been identified as Thomas Ryder Ingram, 51 years of age, and a resident of 857 Robin Hood Drive. This investigation is continuing, but currently the case is being worked as an apparent suicide.