As the Greek Tragedy is Coming to a Head

Unless you have a vested interest in the stock market and the banks, just sit back in a comfortable chair and watch the Greek tragedy unfold. 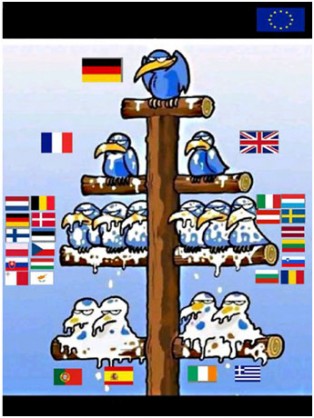 A Bird's Eye Perspective of the Eurozone

What’s going on in Europe? is a question I get almost daily. Upon prodding to be a bit more specific it usually turns out to be a question about the situation in Greece, the volatility in the stock market and what will happen here on account of a potential default over there. My initial answer is a question: Do you have a vested interest in the stock market and more precisely the financial institutions? If the answer is no, than just sit back in a comfortable chair and watch the “tragedy” unfold because it’s mostly about politicians trying to initiate the Rise and Fall of Democracy on the backs of some overly greedy bankers. If the answer is yes: Than take a good look at Jon Corzine, former governor of New Jersey (banker turned politician turned banker) and his sordid performance at bankrupt MF Global.

DemoKratia: People of the Community have the Power (Authority) to Decide

Yes the early history of Democracy was initiated in Athens of the ancient Greece. The noble experiment in which all members of a society (country) supposedly have an equal share of formal political power, translated as the right to vote, has in the past week however shown quite clearly, that democracy is no longer a reflection of the will of the people. And to be honest, I don’t think it ever was.
It’s all about politics and politicians pushing their own agendas, often supported in their efforts by funding provided by like minded interests.

Here is what’s happening in Greece. When Greece’s prime minister Papandreou’s announced that he would put the latest Euro bail out plan as a referendum in front of the Greek population last Monday evening, he was essentially pushing his opposition into the corner of “are you with us on this or not?…time is running out, there is no money to pay our bills or government workers unless we agree to the Eurozone bail out plan and if we don’t we’ll be bankrupt by Christmas.

Well, that plan didn’t fly too well as creditors got real angry and world markets went into a conniption. That was last Wednesday and much has changed since Papandreou had to cancel that supposedly democratic move. Under pressure from the prosperous counterparts in the European Union, Greece’s conservative opposition, frankly the ones that produced the falsified financial records that started the whole charade in 2009, are temporarily in the driver’s seat as Papandreou got a narrow confidence vote victory, based only on the pledge that he would be willing to quit and form a caretaker coalition government. It’s almost as good as this week’s episode of the CBS hit series “SURVIVOR”.

The Essence of the Greek Culture

To be fair, my last trip to Greece was in 2003 and at that time the country was gearing up to host the Olympics in 2004, so industrial and construction activity was almost comparable to that of the northern European Countries who originally introduced the idea of a common currency and one trade zone to the rest of Europe.
To understand why the idea was good (and still is), you only have to look at the USA. To understand that the execution of the idea on equal level base was a political pipedream, you have to understand that the average difference between a Dutchman or German and a Portuguese or Greek in matters of work ethics is enormous. Whether it’s climate related or culturally embedded, northern Europeans live to work and souther europeans work to live.
And before you attack me on this position, both live/work relationships work for me, it’s just that assuming that the Eurozone integration would be an easy one, was irresponsibly ignorant, an arrogance you can only expect from hardcore politicians.

It’s like assuming that residents of Seattle Washington and Miami Florida are tooled the same way with the same needs and wants.
Northern Europeans take 2 or 3 vacations per year to escape from the misery of the climate and for the rest of the time they work…and work…and work. Southern Europeans have 2 hour lunches, take a nap, enjoy happy hour and an extended dinner table presence. Weekends are times to party and sleep. I’m not pussyfooting around here just because this may sound offensive.
Even if these profiling standards have marginally changed in recent decades, the essence still explains the difference in the strength of the respective economies.

Germany, Holland, Belgium, Scandinavia, Northern France even Northern Italy are the economic engines behind the Eurozone and only time, and I’m talking a generation or two in terms of time, will bring the Southern European economies marginally up to par with their northern counterparts. It’s like here in the USA. Mississippi was and still is the poorest state in the nation and probably will be until basic economic laws make it attractive enough for companies and industries to invest, educate and build a new future in and for the state.

Don’t Give up on the Eurozone

Since 1992 I have seen an increasing number of northern European companies move business into mediterranean counterparts, a process that will ultimately bring forth the anticipated economic integration. It is not the political force that will make it happen; it’s the force of business and entrepreneurs.

The bailout drama that is currently playing and keeping markets volatile, is instigated by politicians and financial institutions, pretty much in the same way these vultures have managed to almost paralyze the economy here in the States.
With the veiled threat of a referendum Greek Prime Minister Papandreou tried to play the democracy card that could have given him a statue on Syntagma (Constitution) Square in Athens, until The German French Couple of Merkel and Sarkozy put him back down to the bottom of the European Pecking Order. For politicians it’s only about posterity in the current moment.
Pity that investors don’t understand that it’s easy to temporarily turn the clock back culturally and economically if Greece wants to step out of the Euro Currency Zone. They once again will become a very affordable vacation destination with a cheap Drachma, until enough time has passed and enough economic leveling has occurred to give the Euro another shot, ten or fifteen years from now. All the thunder and lightning right now is the fallout from giving democracy to the politicians to interpret as they see fit.

In conclusion for this chapter of the Greek Tragedy, I hope that the Greek Government will fall and Greece will not get the next euro 8 billion ($11 billion) installment of its loans and will foreseeably go bankrupt before Christmas. The true tragedy is then that Papandreou, whose coalition came into office in 2009 with a landslide of the votes, found that much of Greece’s financial reality was the victim of falsified data. He has valiantly fought to restore the credibility of the country, but will likely finish up finding that in the process he destroyed his own credibility.
And that’s just it…another “Greek Tragedy”.