Austin Kimberly is the grandson of Amelia Concours d'Elegance volunteers Joan and Randy Kimberly and has grown to be a fine racer. 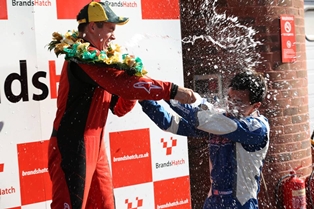 It was a near perfect race weekend for the young American student and racer. He qualified his Ray GR08 Formula Ford supported by The Amelia Island Concours d’Elegance on the front row of the grid and raced to second place in the ninth round of the national championship. In round ten, he won, leading 47 of the 48 laps in the weekend’s two-race national championship format.

“Race one was tough because I had pressure all race. I left the door open on the last lap and my Dempsey Racing teammate, Skyler Robinson, went up the inside going into Paddock Hill Bend,” said Kimberly. In race two Kimberly led from the start to finish winning by two seconds.

With just two races remaining in the 2013 national championship, Kimberly leads the prestigious Avon Tyres British National Formula Ford 1600 Championship. Kimberly’s next race is on August 31st at Oulton Park in England, with the season finale taking place on Saturday, September 28th in a three race series at the 2.1 mile Trac Mon Circuit in Anglesey, Wales.

“It’s very satisfying to see our logo on Austin’s racer,” said Bill Warner, Founder and Chairman of the Amelia Island Concours d’Elegance. “His family is part of our ‘concours family’ and we’re happy that we can help him realize his dream of becoming an engineer and a champion racing driver. Fostering an interest in the automotive field in young people has always been part of ‘The Amelia’.”

Follow Austin’s racing career on Facebook at AK47 Racing and on race weekends through Timing Solutions Limited at www.tsl-timing.com.