Be Candid…You’re on Camera (VID)

A last minute brain whisper made us join the pirates parade this year for shrimp festival. It was pure fun and here is the video to prove it. 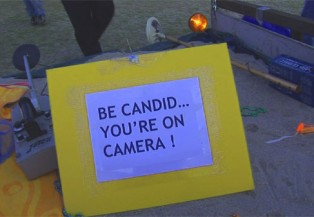 The thought came late…a couple  days before the participation deadline. Why not take a float in the pirates parade and film people lining up to watch the parade roads. We don’t have trucks or trailers here at SearchAmelia so we were depending on other resources.

A good part of our writer group is also heavily involved in the local pirate organization and other charities with presence in the Parade, so a quick meeting established the boundaries of what could and could not be expected and on Parade morning we took a small trailer to Peters Point, loaded a layer of sand onto it, parked beach chairs, umbrellas, banners, flags and other paraphernalia on it and took off for the gathering point at the park.

Well, no matter that we may have looked a bit rough around the edges, we still had tons of fun and got great reactions from the people along the streets. And all that without a drop of alcohol.

In any case we could not have competed for first prize with the power and tool talent behind the Home Depot float, which outshone even the various Pirate presentations. So Kudos and congrats go to them.

We will be back next year. Bigger and better as the expression goes. Until then, enjoy finding yourself in the crowds. We will make the full video available for airing on Channel 29 unless the powers that be have overriding apprehension with commercial messages that were involuntarily picked up along the way.

Sandy Price, Danny Leeper, Desiree Dinkel and all you other great volunteers….thanks for another great Shrimp Festival.