With google+ nipping at its heels, Facebook is completely re-inventing itself to bring back emotion. 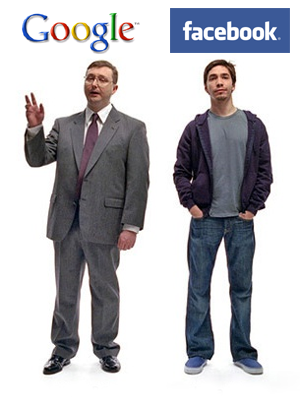 Is there an analogy with the Apple-Microsoft Stand-off?

Last night my wife mentioned that Facebook was drastically changing and she didn’t like it.The Social World was abuzz with critiques on the social media giant. Well, after today’s unveiling presentation at the f8 Conference in San Franciso.

Let me say up front Facebook doesn’t really care to grow beyond the 800 million or so users, no does it care a bit about increasing pageviews for ad revenues. Its priority has nothing to do with increasing revenues, that’s for later.
No, Facebook is all about emotion, or more precise, the loss of emotion over the years. Facebook has a spectacular level of engagement for many, but over the years it has become a must rather than a want. Many people these days visit Facebook these day out of necessity, not desire. They go there because their friends are there.

With Google+ openings bid at 10 million plus users, Facebook launched 3 changes recently, all designed to increase emotional contact, real time speed and bookmarking capabilities. But these afternoon in San Francisco it became clear that this was only the beginning, because as one observer said: These changes will make it so you know your friends better than you ever thought you could”, adding that software developers will be elated, users will be shellshocked (for a bit) and social media competition will feel like they were scorched in the social giant’s afterburner, finding themselves feeling ancient.

We will analyze the changes in the next few weeks on their business merits and keep you up-to-date. If you want to know NOW, here is a video of jubilant young new Billionaire founder Mark Zuckerberg, as he explains some backgrounds.