June was supposed to be the opening and summer would be the training period. The Beach Club finally opens on October 27 for Florida/Georgia weekend. 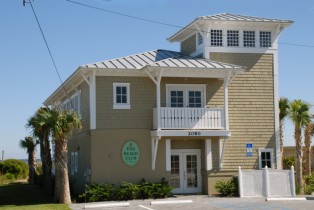 The Beach Club at Amelia finally gets green light

On October 27, three days before the much looked forward to annual college football exchange between the Georgia Bulldogs and the Florida Gators in Jacksonville, we will finally witness the opening of the Amelia Island Beach Club on South Fletcher at the Seaside Park. Four months after the initial opening planning, the licenses were finally in place to start operations, albeit to the benefit of just a relatively small number of local residents.

“Members of the Homeowners Associations in Amelia Park, Oyster Bay Harbour and Yachtclub, Marsh Lakes, Little Piney Island and Cape Sound are the only membership recipients for now,” says Club manager Stephanie Harrison, adding that plans for next year are still much under consideration.

Currently the club will not be publicly accessible and only members will have access to the entirety of its services, including catered events such as weddings, meetings and receptions. Ms. Harrison puts an emphasis on the fact that no definite guidelines have been set regarding the pricing of these kind of events, even though several request have been received.

The Club, which is owned by Georgia Developer Larry Singleton, features a full bar license and an extensive kitchen and catering facility, besides the traditional lounge chairs services, showers, beach storage and restroom facilities . Spread over two floors with ocean views, the club can comfortably seat 64 guests.

Even though the summer of 2010 has come and gone and government red tape has delayed the opening, Ms. Harrison is very positive and optimistic that the beautiful club will find a quick appreciation among Amelia Islanders and visitors.