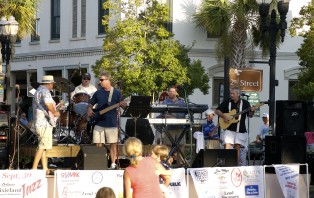 Locally they are known as Jeff Malone, Mike Hawthorne, Dan Voll, Ronnie Stoots and Jay McPherson. The Beech Street Blues Band started out as a concoction of seasoned “local” musicians, shortly after the initiative to organize an Amelia Island Blues Festival was launched last year. It was all purely by accident that Jeff Malone, with a part time professional history on the drums, had just returned to the island after career years in Knoxville and Atlanta. He got together with Dan Voll, a 30 year career musician and guitar teacher, who only months before had exchanged the cold of the midwest for the temperate breezes of a North Florida barrier island. Voll is the only full time musician in the band, and his career moves from Chicago to Los Angles and now to Florida. His virtuosity and diversity in mastering many styles makes him the natural gravitation for the band. Lastly Malone asked Mike Hawthorne to join on bass and the first trio (without a name) was formed during last year’s international Pétanque America Tournament in the middle of November.

But this chance encounter felt absolutely natural between the three and the Beech Street Blues Band was born. Dan and Mike possess great voices besides instrumental skills and a blues repertoire was quickly put together, soon followed by regular gigs in the area.
When Ronnie Stoots on keyboard was added earlier this year, the band had a complete new voice that featured country blues and than several months ago, Jay McPherson came to round out the band with a very distinct Allman Brothers feel, both on guitar and overall sound.

On the Labor Day edition of Sounds on Centre in historic Fernandina, the Beech Street Blues Band’s latest reincarnation impressed the audience of some 1,500 locals and tourists with their sound and songlist and when local celebrity Felix Jones climbed the stage for a harmonica rendition, the applause lasted for minutes.

The Beech Street Blues Band will kick off the Amelia Island Blues Festival on Friday, Sept. 16 at 3:45pm. Get your tickets NOW on the AmeliaIslandBluesFest.com website or from any of the following ticket outlets: