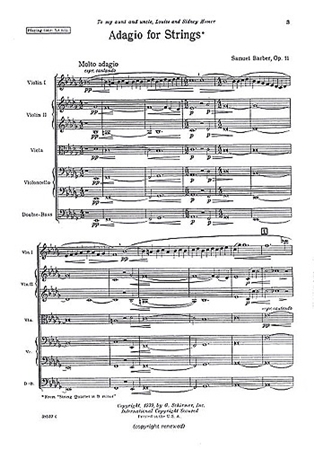 Adagio for Strings by Samuel Barber

The final concert of the season for the Amelia Island Chamber Music Festival is Beer and G-Strings II at O’Kane’s Irish Pub on Sunday, May 30th at 8:00 PM.

The Mouth of Amelia calls this “Sam’s Club” as the concert celebrates the 100th Anniversary of American Composer Samuel Barber’s Birth!

Footnote from the Mouth: Memorial Day Weekend is about as American as you can get, and Samuel Barber is a quintessential 20th century American composer. Most of you know his “Adagio for Strings” and his other work is just as hauntingly beautiful. At a very early age, Barber became profoundly interested in music, and it was apparent that he had great musical talent and ability.

At the age of nine he wrote to his mother, “Dear Mother: I have written to tell you my worrying secret. Now don’t cry when you read it because it is neither yours nor my fault. I suppose I will have to tell it now, without any nonsense. To begin with I was not meant to be an athlete. I was meant to be a composer, and will be I’m sure. I’ll ask you one more thing… Don’t ask me to try to forget this unpleasant thing and go play football, please! Sometimes I’ve been worrying about this so much that it makes me mad (not very).”

He wrote his first musical at the early age of 7 and attempted to write his first opera at the age of 10. He was an organist at the age of 12. When he was 14, he entered the Curtis Institute in Philadelphia, where he studied piano, composition and voice.

Personal note: His sister, Sue, was the Mouth’s mother’s best friend and many an evening Sam and his friend Gian Carlo (Menotti) would entertain family and friends with mock operas staged around the dining room table.