Being Kind Does Not Cost a Penny

Being kind is not always easy, but it is never put under repute, as is anger and fear and hostility. Kindness is contagious. 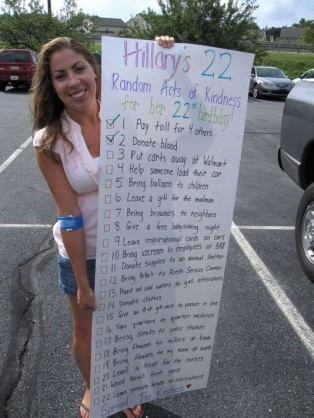 For starters, here is an idea list for Acts of Kindness

The teacher went to the board at the front of the room and wrote the question, “What does it mean to be kind?” The assignment then given by the teacher was for each student to write a short essay on the question. As the students began to think and then write, I noticed one little girl continued to think, and she seemed to be running out of time to write. I also noticed the expression on her face was anything but pleasant.

I wasn’t certain whether her attempt was to be either sarcastic or disrespectful, but as I watched the little girl, I began to realize she really was asking a sincere question, and responding honestly. “Both!” the little girl answered loudly. The girl was so insistent that she didn’t understand the word “kind” that she never did write anything on her paper while I was there. And a discussion with the teacher later reassured me that the little girl really didn’t understand what the word “kind” meant, especially in a pragmatic sense.

Kindness is not just something that you do, it is something you offer after you have been taught, and I would presuppose mostly by example, found in the attitude of someone whop is truly kind in heart and intention. And since this little girl did not understand the definition of kindness, nor could she come up with anything to write about kindness on her school assignments, I would suppose that the parents were evidently not terribly kind, and certainly not teaching their children the meaning of kindness, which probably comes most often by example.

When was the last time you went out of your way to be kind to someone less fortunate than yourself? Who has learned the act of kindness from your example? Do you know what it means to be kind? Have you made certain that your children understand the meaning of kindness? What a different world this would be if everyone were kind.

It would seem to me that in all things we are required more than anything else to be kind first. No matter how badly someone hurts you or how offended by someone you might be, isn’t the wisest road of action always to be kind first, even in dealing with some of the worst situations. So many people are wounded, hurting, not knowing why life has treated them the way it does, and only seek a kind word from someone who can ease some of the pain.

No matter how offensive someone is, the best defense is always kindness. Being kind is not always easy, but it is never put under repute, as is anger and fear and hostility. “Be ye kind, one to another.” Is not just a suggestion. It is a command. And in doing so, we give an example to those who are watching us that often reverberates into their life and action, simply because they first saw the kindness coming from you.

Kindness is contagious.  Be kind, and in showing kindness, you bring an example that is followed by many who saw your kindness, and they too begin to share the kindness that they have seen you activate. And the activation of kindness can stop wars.
“Love is Kind.” (I Corinthians 13:4)