Bicycle Helmets are for Marshmellows [video]

If Amelia Island would ever become car-less, towing companies would be out of business and the island would resemble Amsterdam. 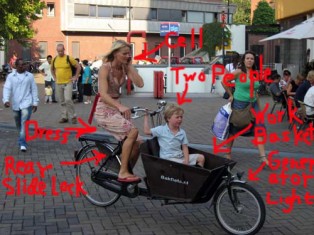 She should maybe drop the cell phone???

I got quite a few private comments on my article titled Marshmellow Kids last week about Australian 16 year old Jessica Watson’s solo sail around the world, but especially the part where I talk about the almost freakish call for the use of helmets when riding bicycles here in the States. (They would make it a law if they could… Can they?)

My wife recently bought a bike which she is now personalizing with pink colors and stickers, while she is waiting for her helmet to arrive, no doubt color coordinated and cute. I know she has not considered (yet) the consequences of what a helmet will do to her hairdo, especially since she is planning to use her bike to go to work; but honestly, I love her for electing to take a bicycle to go to work instead of the car. Living on this quiet beautiful little island, riding your bike to work or on quick errands has a great number of advantages for lungs, body shape and overall health, besides the fact that it is just perfect in the morning hours with a light breeze coming off the ocean. It’s the stuff dreams are made of.

I’m all for maximum bike use, something I grew up with in Holland where literally everyone has a bike as a means of transportation. Some people even have bikes for every day use and special bikes for the weekend and exercise. A bicycle to a Dutch person is an extension of their body; it’s like growing up on skis for someone in the Alps or the need to swim when you grow up near the water.
An important difference between growing up in (most) of the US versus growing up in Western Europe is pictured in the video below, which mysteriously appeared on youTube at about the same time that I wrote the article about Jessica Watson.

However the flack I received over my position on wearing a helmet on a bicycle were all related to the issue of safety and child protection; not one was directed at the fact that many kids could take a bike to school (especially on this island) instead of having parents drive them morning and afternoon. Besides a serious attempt in attacking child obesity, the environmental benefits would be substantial, not to mention the benefits on pocket book and parents time management.

I actually know of parents that had to adjust their professional schedule this year to accommodate the fact that their teenager did not start classes until 8:55am. Stop babying your kids. Of course the use of schoolbuses is OK for a distance of for example 5 miles from school, but inside of that…. get a bicycle! You do your kids and the environment a giant favor.
And if you want to protect their heads with helmets and slowly kill their natural instincts and abilities to be careful, then do so by all means if it makes you feel better. But stop calling other people, cultures and nations irresponsible when they don’t adhere to your standards.

And if you watch this video which someone titled “Insane Rush Hour in the Netherlands”, then please understand that there are billions of people on this planet that elect to learn to behave and act responsibly depending on their circumstances and abilities, who do not appreciate being included in something called insane.

The honest by-line on this video was: “Rush hour clip from a street corner in Utrecht, Netherlands where most of the transportation is done via bicycles. I watched the clip just waiting for the big pile up but was equally impressed when it never came.”

I dare you to watch this video and pay special attention to:
1. the fact that absolutely no one wears a helmet
2. the acrobatic weaving and control of these bike riders and their bikes is an accomplished art
3. the fact that in the total 2 minute video all passing transportation is bicycles and public transportation. There is literally only one passenger car going by in the background. Imagine the environmental and financial benefits of that system.

In closing I do admit that this system does not always work here in the States where distances are often much bigger and bicyclists  in large nunbers have no clue how to behave in traffic, but in urban areas a properly schooled bicycle generation would definitely be a solution for many of the oil related problems we are facing. And here on Amelia Island there is no excuse at all actually.