I led the first lap before Charlie Mavros drafted past me, along with former AMA MotoST rider Eric Helmbach, at the tri-oval. 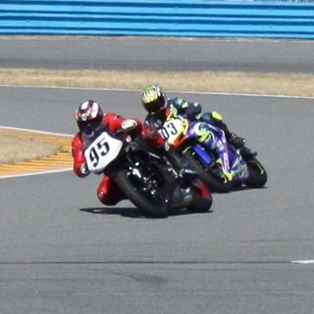 By: Al Smith The 69th Annual Bike Week kicked off this past week in Daytona Beach Florida, along with it, a new season of motorcycle road racing at the world famous Daytona International Speedway. After experiencing a very exciting and rewarding 2009 amateur season, winning four class championships and the title of #1 over-all amateur in the CCS Southeast Region, I was very excited to kick off the 2010 season not only riding a brand new bike, but now as an expert/professional racer.

My first race weekend as an expert was a whirlwind. It took me all day Friday, working with the suspension experts at GMD Computrack, to get the suspension dialed in. By the end of the day, the bike was feeling pretty good, but I was still having some issues shifting it. Coming off a smooth sifting Suzuki last year, the brand new Buell XB12R has a clunky transmission coupled with no quick shifter or slipper clutch. As a result, I was pretty much sliding the rear tire into every corner. 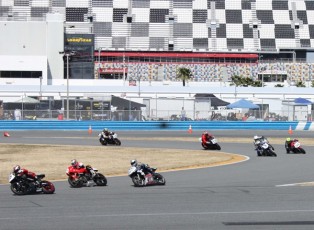 My first race was Sunday morning, LW Super Sport. I had a lot of butterflies just before getting on the bike not knowing how I was going to match up on the Expert Grid. Lined up on the front row outside, I had a clear shot to turn one. Looking to my left, I noticed two veteran expert races, both of whom had a very successful 2009 season, one of them enjoyed a lot of success racing the AMA’s MotoST Series. Luckily, I didn’t have to much time to panic. The one board went up, I revved the bike to about 4,500, the board went sideways and then came the quick green flag. I shot off the line like a cannon. As I rounded turn one, I was in shock and said to myself, “Oh my god, I took the hole-shot”. I led the first lap before Charlie Mavros drafted past me, along with former AMA MotoST rider Eric Helmbach, at the tri-oval. I hung with the two talented riders for most of the race but with every lap, they inched ahead and there was no way I would be able to challenge them for the lead again.

I ended up finishing 3rd and was on the podium for my first EXPERT race and I had a smile across my face from ear to ear. 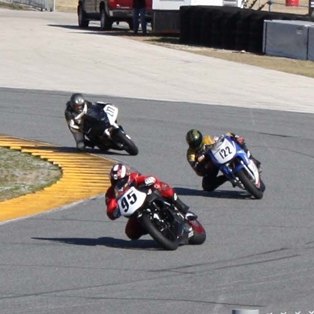 My next two races included Light Weight Superbike and Light Weight Formula Forty. Looking at the two grids on paper, I quickly notice both races were stacked with Ducati 1000’s and Bimota 1000’s. Both very high-end motorcycles and better suited for the high speeds of Daytona. However to my surprise my Buell XB12R, having pretty much a stock motor, held its own on the super speedway. The LW Formula 40 race, although I ended up seventh, was the most exciting, intense race I’ve ever been in. We had a five bike battle for 3rd thru 7th place the entire race. At one point we came through the speedways tri-oval (4) wide and stayed in a pack the entire race constantly swapping places, especially on the high banks utilizing the draft. At one point, I went from 3rd to 7th and back to 3rd in one lap. The Suction of a four bike draft on the NASCAR track is amazing! Even though I had a miscue on the last lap entering the chicane and as a result lost the draft of the pack on the final run to the finish line, it was the most exciting races I’ve ever been in. My wife said the track announcers were going crazy calling the race. Some have told me it was the best race of the day.

My next outing will be at Jennings GP the first weekend of April. Jennings GP is a smaller more technical track. Most racers refer to it as a riders track because skill and technique will get you around quicker than horsepower will.