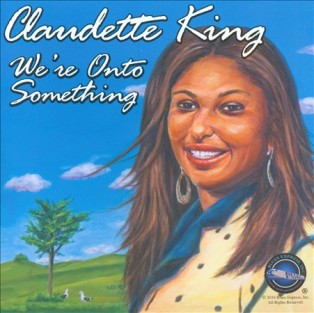 The Amelia Island Blues Festival tradition of having famous Blues great’s children perform their bloodlined talents at the festival continues now that the festival contracted BB King’s youngest daughter Claudette to be the opening act for Saturday September 14. King made a name for herself in the San Francisco Bay area and the performance houses in Nevada (Reno) and several years ago moved to Atlanta, Georgia where she recorded her critically acclaimed debut album “We’re On To Something”.

To be fair, she recorded another album years before titled “Whiskey Makes Me Sin” which primarily got airplay in Europe, reason why “We’re on to Something” which had the working title “It’s Easier Alone” is really her debut in the US markets.

Although her father’s influence is very much in evidence on this album, it’s only one of many;
This disc has been a long time coming: King has been performing in San Francisco clubs since the mid-’80s, and the stylistic range she’s developed over the years is impressive.
While you’ll hear plenty of solid blues on this album — notice in particular the rocking, barrelhouse big-band blues of “Can I Walk You to Your Car” — you’ll hear even more R&B and soul, and her vocal style has more than a hint of the church in it.
For this album, producer Dan Bacon brought in a couple of expert songwriters to help with new material and the songs written by Dennis Walker and Alan Mirikitani are very good: “This Ain’t How I Planned It” is a deliciously soulful ballad, while “A Dog Like You” is a slow-burning number that starts off sounding like a classic kiss-off song but then throws you a curve ball.
Some exceptional high-quality fare comes with the funky R&B workout “Whole Lotta Nothing” (my absolute favorite) and a swinging big-band version of the Robert Cray song “Playing with My Friends.” King’s voice is clear and solid, with a pleasant fuzz around the edges, and her energy and joy are palpable on every track.
With Shemekia Copeland, daughter of blues great Johnny Copeland, headlining the festival in 2012, and Mud Morganfield Jr., Muddy Waters’ oldest son headlining this year’s line up, the Bluesfest committee has apparently embarked on a quest to find talented offspring of blues greats to perform at the Festival. Claudette King is definitely worthy of that predicate.

In an effort to give local young musicians the opportunity to develop their talents, the Amelia Island Blues Festival Committee recently asked high school band instructor Johnny Robinson for a wish list of instruments for use by band members.  Two weeks ago the Blues Committee delivered on their promise with three donations to the band’s music closet.

The 3rd annual Amelia Island Blues Festival is scheduled for September 13th and 14th and will move from Main Beach to Centre Street on Friday night and the Marina on Saturday.  Those attending the festival are encouraged to bring an old or new instrument for donation to any of our local schools and/or a canned food item for donation to the Barnabas Food Bank.