When the Trans Alaska Pipeline sprung a small leak last week, gas prices went up to $3.06 here on island. What's next? 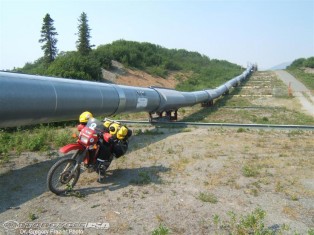 Anything technical, surrounded by metal pipes and copper wires scares the bejesus out of me. I look at the HDTV remote control and run for the hills. I nod in deep respect and full of admiration when someone tries to explain to me the principles of a combustion engine. Obviously I don’t know much about automobiles. So when there is an unfamiliar sound coming from under the hood of my car, or exotic lights start going off on my dashboard, I think it best to regard them as urgent signals that my car requires immediate attention. I usually look under the hood, try out oil levels and make sure there is water in the wind shield wiper reservoir and call a friend or the neighbor or the tow truck, who brings it over to a mechanic, who charges $75 an hour because his children need to go to college and I consider it a basic trade off: money for peace of mind and the privilege to drive my own car. Whenever I come to my senses I wonder why he thinks he needs to send his kids to college, as his kids will most likely never make $75 an hour, after graduation.

In the energy world, a similar thing is happening; the trade off I mean, but as always, on a much bigger scale, and with far more ominous implications.
A rupture over last weekend on the Trans-Alaska Pipeline System (TAPS) has effectively cut off more than 12% of the domestic U.S. crude supply, as virtually all of the Northern Slope production is affected.

This time it is an apparent pumping station problem, but the effect is the same as if somebody blew a hole in the pipeline itself. It also points‚ once again, to an increasing concern in an aging transportation network.
We may be looking at an accelerating crisis considering last summer’s Michigan rupture on another pipeline coming from Canada. Despite the laying of additional pipes each year, and an ongoing schedule of repairs and replacements, the system is clearly showing its age.

And the system is huge.

There are more than 55,000 miles of major (or “trunk”) oil pipelines connecting regions throughout the country, and upwards of 40,000 miles of collector and feeder lines. All told, when you factor in the smaller delivery lines to refineries (for storage, and acting as secondary and back up transmission), the total approaches 200,000 miles of pipelines. An episode on any of these lines can impact the availability (and price) of oil. And TAPS just happens to be the most visible and important. And this failure was hardly unexpected.

In 2006, two separate TAPS leaks shut down the transport of crude and subjected BP, yes the same one as in last year’s Gulf Leak, the principal in both the North Slope production project and the pipeline, to a period of intense Congressional scrutiny. BP paid a $20 million in fines, plus restitution, and replaced a 16-mile stretch of the pipeline. Turn the page and move on.
Less than five years later, TAPS concerns have only increased. TAPS has an “F” rating, mostly as a result of an 80% corrosion factor in more than 150 locations on the line, including serious concerns over high-pressure connectors. Leaving all reasonings and excuses about priority approaches and need expansions aside,
the cost factor has emerged as the center of the problem – not just for TAPS – but for aging pipeline systems throughout North America and abroad.
The total repair price tag worldwide is now approaching $550 billion and growing at more than a billion dollars a week or another $550 billion over the next ten years.

But this latest leak is merely the most recent signal of a potentially huge problem.

Put simply, the pipeline system is aging quicker than it can be repaired or replaced. If a heavy traffic road needs resurfacing, we have several options available to warrant traffic flow. Not so in this case. Improper patch jobs and either nonexistent or defective gas-leak warning systems are becoming more commonplace. Many of the prophylactic mechanisms are simply obsolete for effective use these days
As we rely more heavily on a system with an average age in excess of 30 years, we run the almost-certain risk of major leaks and failures becoming commonplace. In relationship to the importance of oil reference to our lifestyle and economic growth, it would be easy to work up a plan for replacement, tell chairman Bernanke to start up the dollar press and hire a million or so to do the work. Since that is not happening and the situation seems to worsen by the day, I can only conclude that oil is not the number one concern for oil companies over the next 30 years. Not willing to invest in a proper transportation distribution system can in my mind only mean: there won’t be any oil flowing 30 years from now. The system will be obsolete. All oil wells will have run dry. 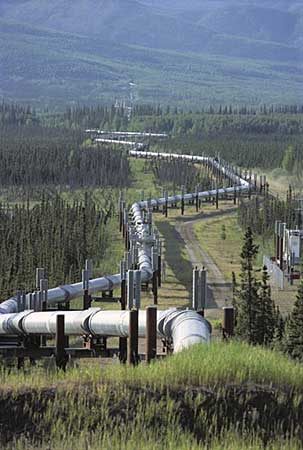 Exposure to the elements creates 80% corrossion

There is another concern about the Leaks

Just in December alone, recurring oil pipeline leaks in Salt Lake City (“Utah Pipeline’s Oil Spill- December 10) and the Chicago area (Romeoville and Lockport, Illinois, December 14) brought a renewed concern over the integrity of drinking water for major municipalities. According to Daily Finance, super-majors BP, ConocoPhillips and ExxonMobil have cut oil production from the Prudhoe Bay field in Alaska by 95 percent while the pipeline undergoes repairs.
This latest TAPS event seems limited to a rather small leak, which has been contained. The shutdown is only expected to be for a short period; the pipeline is expected to be back in operation this Friday, January 14 so gas prices at the pump here in town could move down from $3.06 to $3.04 in recent days.
That means we may have dodged another bullet this time. But the signals keep coming, loud and clear. The oil pipeline system is becoming compromised. Temporary fixes may be the answer of choice until the well runs dry.
We may want to prepare for these episodes as more damaging and more protracted ripples affect the entire economy. And that is just one reason why gas at the pump will reach $4 a gallon this year and oil  $100 a barrel. I’ll save you the weakening dollar story, the increased Chinese demand story, inflation, double dip recession or even depression stories to explain why oil is going to go up. On the news of the pipeline shut-down, the price of crude on the New York Mercantile Exchange jumped more than 2 percent to nearly $90. That is proof number ONE of the laws of supply and demand.

As this future quickly approaches many will suggest (again) that speculators play a part in rising prices, as was the case when oil prices hit a record of $147 a barrel in July 2008. And the truth is that speculators will always have some degree of price impact in any commodity market. However, there is a much greater issue here at work: oil supply vs. oil demand.

The truth is that oil is finite and rising global demand is unsustainable at current production rates. Simply put, world supplies of crude production can’t keep up pace with skyrocketing global demand. While U.S. demand for oil remains flat but high, demand for oil continues to rise in developing economies such as India, China, Brazil and Indonesia (3 billion people). This rising demand, lack of supply, maximized transportation capacity and with an expected production decline on the long run is the root of the continued price increases that is driving the global market today. Peak oil is real and prices will continue to rise as global production continues to decline.

Lynne Anderson sang a long time ago: “I beg your pardon, I never promised you a Rose Garden”.

Nobody promised us Oil forever. Oil companies know that and their top people confirm it. 2012 is looking at $5 a gallon at the pump they say. Expect gas prices here to match European prices soon.