Breast Cancer from an holistic point of view 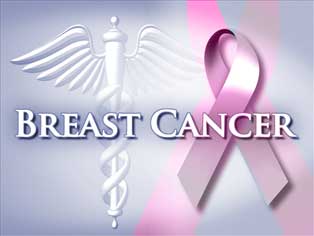 Holistically speaking there is no differentiation between breast cancer from any point of view except cause and prevention.

As we have seen in the previous article: “10 myths about breast cancer”, genetics in a family are just a very minute circumstance to getting breast cancer or any cancer for that matter.

This brings us to the question: What does?

And here is where the views and warnings from a holistic point of view differ from the general medicine approach.

Cancer is, has been and will always be omnipresent in our society. It will not go away and the numbers will not diminish. On the Contrary, the percentages will actually go up further the longer we collectively live. There are no ifs and or buts about it, due to the nature of the “beast”. Our average longevity goes up, cancer will go up.

Cancer is NOT a disease but a degenerative occurrence caused by the demise of our immune system. Period.

Hold on before commenting with all kinds of objections. Bottom line is that every person is imperfect and on a daily basis each and every one of our bodies creates between 200,000 to 600,000 cancerous (mutated) cells that nicely get destroyed by our T-Killer lymphatic cells, if all is well in immune land.

We and our lives

Holistically speaking, your current state of your bodily affairs is the total sum from the day that you where born (and actually from conception and in mommas womb) up until today, including all child’s diseases, your social circumstances, what you eat, drink and smoke, where you live, all your emotions including fears and joys, the environmental circumstances and last your genetic make-up and hereditary predispositions.

On purpose I put the genetics and predispositions at the end because only a “trigger” will cause a genetic disposition to become apparent unless it is already a birth defect.

Both camps agree on certain triggers, but differ in the approach to eliminating cause (triggers). General medicine refuses the demand to eliminate the triggers and tries to “compensate” by using drugs of unnatural composition to trick the body and/or mind to think that the triggers are not present anymore.

This brings us to our Grand Central defense mechanism: Our immune system.

Immune system and the threats to its well-being.

First and foremost detriment to our immune system is that “√ºbung macht den Meister” or loosely translated into: “a good workout once and a while will create Champions” and the use of antibiotics as candy for every sniffle, infection and rash in the late 60’s, 70’s and 80’s has made many immune system lazy to the point that it cannot even recognize a real infection or even worse, human produced carcinogen cells.

But there is more harm done than just antibiotics. The following list is a threat or a burden to or on your immune system and it is not necessarily in order of severity since this works different for every human :

…And the list is not complete but most bases are covered that either directly undermine the functioning of your immune system or are of a great burden to a normal functioning immune system.

Why is your immune system so important?

It is the ONLY defense mechanism that can recognize mutated cancerous cells!!!!

I can’t make it any clearer. If your immune system cannot recognize, or is too busy or overburdened with all other threats to its existence, it may “forget” to kill a couple of those mutated cells. No harm done yet since, if your immune system is restored within a reasonable time, it may still get a chance to kill those mutated cells before they go into an encapsulated state. Once they reach that point however, it will become impossible even for the best functioning immune system to start an all out “war” since the “lump” has now its own habitat comfortably nested within healthy tissue.

The reason why it is comfortably nested and can brood further, is that the lump does not have its own blood supply but gets the nutrients from surrounding tissue. The absence of blood vessels also means the absence of lymphatic Killer T-Cells and there is no other way to kill the mutated bastards then getting T-Cells into the core of the lump.

Your habitat is where most causes are concentrated that trigger mutated cells. Below are some of the most well known habitat bound causes: 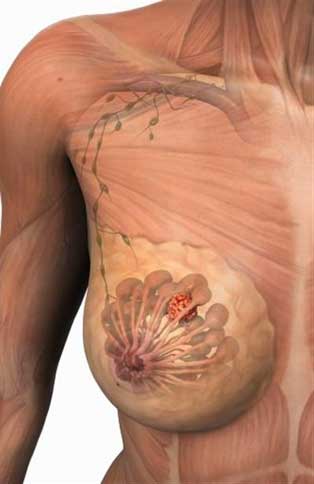 Gland rich tissue exposed to pressure will "fight back".

Here are some habitat and lifestyle bound causes and triggers that are specific to higher risks of breast cancer.

The human breast (Female and Male to some degree) is the softest tissue in humans. It is a delicate system with a very high concentration of mammal and lymph node glands.

Breast enlargements do the same possibly even worse.

Let’s get back to the Bisphenol (BPA) in plastic. This compound is used to harden plastics and recent studies have shown that this compound, especially when heated up in microwaves and baby bottles, but also water bottles exposed to heat or sunlight dilute into the content of the bottle or container. This nasty chemical¬† mimics estrogen and thus influences the estrogen levels in females and most certainly can create a higher risk of developing breast cancer, prostate cancer in men and reaching earlier puberty in children. (http://www.niehs.nih.gov/news/media/questions/sya-bpa.cfm).

You can read more on the health risks on BPA containers and plastic bottles here (http://health.usnews.com/usnews/health/articles/070808/8bisphenola.htm)

Here is a shocking excerpt on BPA:

Suspected of being hazardous to humans since the 1930s, concerns about the use of bisphenol A in consumer products were regularly reported in the news media in 2008 after several governments issued reports questioning its safety.

What is even more of a concern is that general medicine doesn’t go up in arms against these types of health hazards and just try to work around them. That is ostrich policy as shown so many times before.

The following drugs were considered so dangerous that they where withdrawn from the market:

and the next ones are still on the market but considered as dangerous as the brethren taken off already:

Unfortunately the voice of the holistic community is too weak to divert human initiated disaster in favor of the almighty power and greed of the established order, but simply ask yourself why no real cures come out of the R&D’s of the pharmaceutical companies. The delicate balance of keeping the general public satisfied while creating a lifetime customer is what the pharma-con-men have in store for you.

It seems that only the holistic practitioners remember the following oath. 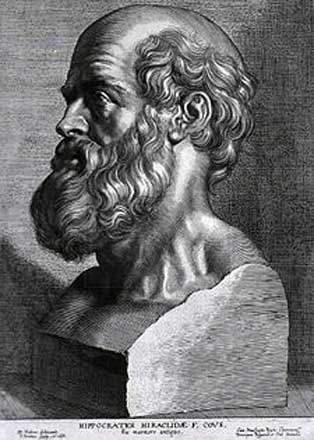 Hippocrates sculpted and painted by Rubens

Hippocrates’ oath:¬† The Hippocratic Oath is an oath traditionally taken by doctors swearing to ethically practice medicine. It is widely believed to have been written by Hippocrates, the father of western medicine.

I swear by Apollo, the healer, Asclepius, Hygieia, and Panacea, and I take to witness all the gods, all the goddesses, to keep according to my ability and my judgment, the following Oath and agreement:
To consider dear to me, as my parents, him who taught me this art; to live in common with him and, if necessary, to share my goods with him; To look upon his children as my own brothers, to teach them this art.
I will prescribe regimens for the good of my patients according to my ability and my judgment and never do harm to anyone.
I will not give a lethal drug to anyone if I am asked, nor will I advise such a plan; and similarly I will not give a woman a pessary to cause an abortion.
But I will preserve the purity of my life and my arts.
I will not cut for stone, even for patients in whom the disease is manifest; I will leave this operation to be performed by practitioners, specialists in this art.
In every house where I come I will enter only for the good of my patients, keeping myself far from all intentional ill-doing and all seduction and especially from the pleasures of love with women or with men, be they free or slaves.
All that may come to my knowledge in the exercise of my profession or in daily commerce with men, which ought not to be spread abroad, I will keep secret and will never reveal.
If I keep this oath faithfully, may I enjoy my life and practice my art, respected by all men and in all times; but if I swerve from it or violate it, may the reverse be my lot.

bottom line: Breast Cancer or any other cancer is not a disease but a degeneration of your immune system due to factors of old age deterioration but more importantly because the medical world doesn’t dare to stand up against the mighty corporations pumping out chemicals that are poisonous to humanity and rather see you dependent on the cash cow called “The wheel of Life and Death”.