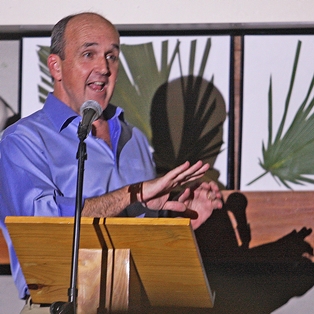 Carey Dresser took home the ‘Fern and Dina’ trophy but everyone was a winner at Friends of the Library’s 2nd annual Amelia Island Storytelling Slam in September at St. Peters Church where five local luminaries took to the stage to raise funds for the Fernandina Beach Library.

A former ballet dancer who has performed with professional companies around the world, Dresser is active in Amelia Island theater productions and as a local realtor.

Emcee Arlene Filkoff, last year’s champion, entertained the capacity crowd with her own memorable story while votes for favorites were counted. Violinist, Will Howery, assisted on an instrument he built by hand.

To these talented speakers and the scores of others who participated, contributed, volunteered and voted with their cash, Friends of the Library gives heartfelt thanks for an extraordinary evening designed to help furnish the library. Plans for next year’s Story Slam, which may be even bigger, will soon be underway. Watch for information on more upcoming events in the library, 25 N. 4th Street, and on the FOL website, fernandinafol.org.