After two years on the side track, Baha Mar Resort in Nassau is back on the boiler plate with a $2.6 billion backing from China 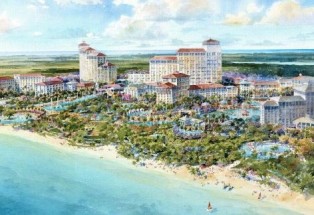 In a prelude to Cuba becoming accessible to American Travelers again after 50 years of travel restrictions, the entire Caribean seems to be getting a face lift of capacity expansion that is attracting investments of global scale and proportions.

After a two year stint on the side tracks, Baha Mar Resort in Nassau Bahamas is back on the boiler plate with a $2.6 billion backing from the Export-Import Bank of China and China State Construction and Engineering Corp. With that announcement comes the message that the 1,000-acre project will break ground later this year and when completed in 2013, Baha Mar will include six resorts with 3,000 hotel rooms; a 100,000-square-foot casino; three spas; an 18-hole golf course; meeting space; a 20-acre beach and pool complex; and a retail village with shops, restaurants and entertainment venues set along 3,000 feet of beachfront property.

The Baha Mar properties currently open are the Wyndham Nassau Resort (which will be downsized to a boutique hotel), the Crystal Palace Casino and the Sheraton Nassau Beach Resort and still to come are Westin, W and St. Regis hotels. There must be a lot of confidence going around that Asian travelers will find the Bahamas and its casino operations attractive, because with the impending travel ban lift for Cuba, Greater Miami will have a re-introduction to its own past in the cross hairs.

Last week Mexican resort city Cancun hosted the first US-Cuba Travel Summit attended by many US travel professionals who all were of the opinion that unrestricted travel for Americans to Cuba is now a matter of ‘when’, rather than ‘if’. In a nationwide signature campaign started last year by online travel giant Orbitz, more than 100,000 signatures created the movement in Washington to end the 47 year old travel ban.
Cuba is now preparing to service an expected 1 million Americans annually with 30 resort projects in the pipeline, counting 10,000 rooms, an expansion of airlift capacity from 3 to 10 international airports and golf courses galore.

And as they say on TV:

A little more south into the Caribbean W Hotels Worldwide opened the 157-room W Retreat & Spa-Vieques, Puerto Rico, not only marking the debut of the W brand in the Caribbean, but also providing the previously US Navy test ground Spanish Virgin with a true chance in tourism after being a shooting range for decades.

More west on the island of Hispaniola, the Dominican Republic is attracting large investments for resort expansions as AMResorts just unveiled an 1,100 luxury suites four resort expansion plan called Gems at Capa Cana.
The complex will offer the 200-suite Zoetry Gems at Cap Cana; the 350-suite, adults-only Secret Gems at Cap Cana; the 350-suite Now Gems at Cap Cana; and the 200-suite Now Preferred Gems at Cap Cana. AMresorts is a full subsidiary of the Apple Leisure Group, grown out of the original Apple Vacations wholesaler.
They recently opened 2 Secret’s Resorts in Montego Bay, Jamaica and company sources note that by 2012, the firm will have 30 resorts with more than 10,000 rooms, including 10 resorts and 3,300 rooms in the Dominican Republic. Mind you, not that the local population sees a lot of benefit from these investments, as ALL INCLUSIVE is the name of the game down there.

With cautious signs that the global economy is rebounding from a long drawn recession, the travel and leisure operators are apparently taking the bull by the horns in preparation of a major travel comeback, supported by capital from the global markets.