After calling some of our local veterinarians we realized that we could not afford 200 dollars on a cat that we had rescued as good Samaritans. 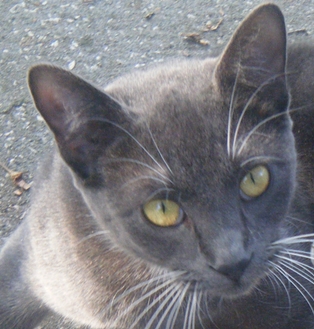 Last week I set out on a mission to have my daughter’s cat spayed here on Amelia Island so we did not contribute to the growing population of abandoned Kittens.

Gracie is a stray cat that actually did follow my daughter home on the evening of June 13th. Kids always say that pets followed them home and want to know if they can keep them. We know that our daughter was telling the truth because we actually watched the kitten come out of the bushes down the street from our house and follow her and a friend home. After checking the cat out we realized that it was starving and had obviously been abandoned somewhere close by. Our next door neighbors have a few cats so we borrowed some food from them and some kitty litter and watched as Gracie devoured everything we fed her.

I told my daughter that if Gracie hung around, I cannot stand the smell of cat urine so an inside cat is out of the question, then we would get her shots and have her fixed and she could keep her as an outdoor cat with access to the garage as her home.

Gracie, named this because she is anything but graceful, not only stuck around but seemed to really enjoy her new home. She quickly became a part of the family, and I stuck to my original promise. We took her to get all her shots and after an evening recently when Gracie did not come home, we realized it was time to have her spayed before it was too late.

I asked my son to call the Humane Society here on Amelia Island to find out how we went about having her fixed. The Humane society told Alex that they did not do this and gave him the phone number of a place in Jacksonville that could do the job. He called them and left a message. When they called back they told him we would have to take her to Jacksonville, bring our W-2s, last 10 years tax returns, our mortgage papers, first and last born kids, and anything else we thought would help them determine if they could do this for us. I am exaggerating about this, but it was not a pleasant situation.

After calling some of our local veterinarians we realized that we could not afford 200 dollars on a cat that we had rescued as good Samaritans. We did not know what we were going to do.

While driving down 8th Street her in Fernandina Beach I saw the Cats Angels thrift store and decided to stop in and ask them what we could do. I was pleasantly surprised to find out that they not only could handle the whole spaying process but would do it for 30 dollars. The lady I spoke with was extremely nice and scheduled me an appointment to bring Gracie in on Tuesday and we will be able to pick her up on Thursday.

I don’t understand why the Humane Society did not inform us of this, but I am glad I thought to stop in. Gracie will probably not like it too much, but we will be happier. I plan to go back to their store and see if they have anything that we need to help support such a great group.