A 32 inch, 18 pound Grey Grouper is a trophy of a fish when caught within 12 miles of shore. 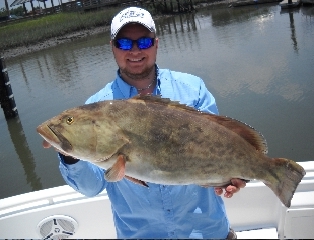 Slick ocean waters and a rising sun resembling a red rubber ball greeted our fishing party as we rounded the corner of the St. Marys channel near Fort Clinch State Park. The water around us fortunately was teeming with hungry Bluefish gorging themselves with glass minnows and two throws of the cast net yielded enough small blues for a day of trolling offshore of Amelia Island.

We headed east to the FA barge area and trolled only two flat lines because the previous day I could barely keep a line in the water as Kingfish and Baracudas were competing for our trolled baits and there was little time to put out more lines. After several hours we had two King Mackerel and one small cuda in the box.

My charter guest being a Musky and Northern pike fisherman from Minnesota wanted to grill some Barracuda which I told him was as good as any fish in the sea. I don`t recommend that you eat Barracuda because there is a remote chance of catching “Ciguatara” disease but he said he would chance that. Islanders say that if you throw a piece of a Barracuda on an ant bed and the ants will eat it it is safe. Where is a good ant bed when you need one? Anyway the striking fish feeding frenzy ended in the FB area with a double header of large Bonito, one of which ended with a Cuda slashing a Bonito in half before our eyes boatside. All the strikes we had whether Kings or Cudas began with the fish rocketing skyward sometimes multiple times putting on quite a show for my guests. 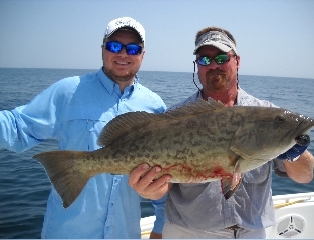 Lastly I pinned a ten inch Bluefish to a chartreuse four ounce Grouper Jig on a light, but stiff spinning outfit and let it down over a small ledge we had trolled over several times. Bounce, bounce and wham! The rod doubled over as I passed it to one of my guests, the stiff jigging rod and braided line did its job and what seemed like eternity passed as he hoisted the heavy fish up through a pack of hungry Cudas who were apparently intimidated by our catch which finally floated on the surface unharmed. A 32 inch, 18 pound Grey Grouper! A trophy when caught within 12 miles of shore.

My new best friends were planning a fish fry and taking pictures of their catch at the dock as we parted ways with plans to fish again in the late fall when the Grouper action is at its peak in our Northeast Florida waters.