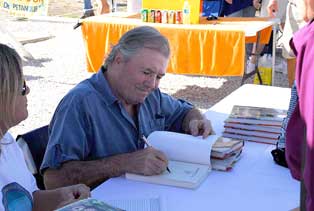 During last weekend’s Amelia Island Petanque America tournament we had the pleasure and honor to interview several world famous chefs and players in front of our cameras. The first one of a series is TV celebrity chef Jacques Pepin, who with his wife Gloria gave a very special dimension to the event.

Unfortunately his flight plans were delayed coming in from the cold in Connecticut, which prevented him from playing the entire tournament, but gave chef Pete “da Meat” from Amelia Island Food Concepts the thrill of a lifetime as he teamed up on Sunday with the man who taught America French cooking.

A delightful gentleman, Jacques Pepin patiently made himself available for a book signing session on Sunday and we actually witnessed locals coming to the event with a bag full of his books to have him dedicate and sign them. At times the line was 30 people long which is a credit for Pepin’s importance to American Gourmets.

Watch him explain why Petanque is such a great game. You’ll get a kick out of it.