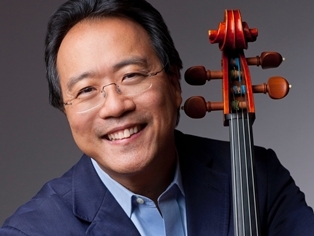 Universally considered one of the world’s greatest cellists, he has made over 90 recordings and received 18 Grammy Awards. Yo-Yo Ma is acclaimed for his extraordinary technique, rich tone and collaborations with musicians from other genres and cultures, which have reinvigorated classical music and expanded its audience.

The January 14 concert is scheduled for 7:30 PM at First Baptist Church, 1600 South 8th Street in Fernandina Beach. Tickets for the general public will go on sale October 1 at www.aicmf.com or by calling 904-261-1779.

Mr. Ma’s performance is made possible in part by CBC National Bank’s Festival sponsorship. Christopher Rex, the Festival’s general and artistic director, said, “We deeply appreciate CBC’s sponsorship, which helped make it possible to bring an artist of Yo-Yo Ma’s international stature to Amelia Island. CBC’s relationship with our Festival extends back 15 years to our inaugural season when the bank became one of our first corporate sponsors. We are truly grateful for CBC’s ongoing support.” Headquartered in Fernandina Beach, CBC operates full-service branches in Beaufort and Port Royal, S.C.

Born to Chinese parents in Paris, Mr. Ma was a child prodigy and at age five gave his first public recital. He later moved to New York with his family and made his Carnegie Hall debut at age nine. He studied at the Julliard School under cellists Leonard Rose and János Scholz. He subsequently sought a traditional liberal arts education to expand upon his conservatory training, graduating from Harvard University in 1976 with a degree in humanities.

One of Mr. Ma’s goals is the exploration of music as a means of communication and as a vehicle for the migration of ideas across a range of cultures throughout the world. Toward that end, he founded in 1998 the Silk Road Project, an arts organization that initially focused on exploring the cultural traditions along the Silk Road, an ancient trading route that linked China with the West. Soon thereafter he established the Silk Road Ensemble, and the group’s first recording, Silk Road Journeys: When Strangers Meet, was released in 2002. The project’s scope subsequently expanded, using the Silk Road as a metaphor for connecting artistic endeavors worldwide and across cultures. He has taken time to immerse himself in subjects as diverse as native Chinese music with its distinctive instruments and the music of the Kalahari bush people in Africa.

About the AICMF
Celebrating its 15th anniversary season in 2016, the Amelia Island Chamber Music Festival has become one of the most prestigious music events of its kind in the Southeast. The Festival is a not-for-profit, tax-exempt organization under Section 501(c)(3) of the Internal Revenue Code.