Chamber Directors asked Nassau County's elected officials to honor the peer whom they felt exemplified the best in elected leadership. 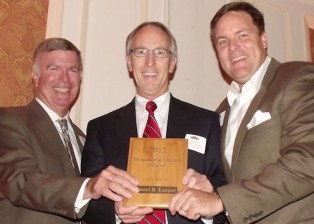 Nassau County, FL – In conjunction with the Amelia Island-Fernandina Beach-Yulee Chamber of Commerce’s second annual Public Officials Reception November 16, 2012, at the Ritz-Carlton, Amelia Island, the Chamber Board of Directors extended the opportunity to Nassau County’s elected officials to honor the peer whom they felt exemplified the best in elected leadership over the past year.

Please note that Aaron Bean was State Senator-elect at the time the photo was taken.