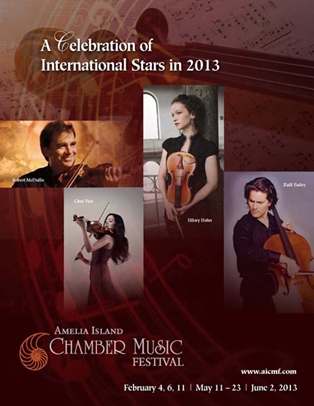 Robert McDuffie
Robert McDuffie, one of the premier violinists on the world stage today, will perform a concert of Vivaldi, Telemann and Bach on May 17 as part of the Spring series of the Amelia Island Chamber Music Festival (www.aicmf.com). The 7:00 PM performance will be held at Prince of Peace Lutheran Church, 2600 Atlantic Avenue in Fernandina Beach. Tickets for this exciting concert are $50.

“He’s a treasure….a musician of probing intelligence, a violinist of authority, and force of great vitality,” so wrote a reviewer for The San Francisco Chronicle. A Grammy-nominated artist, Mr. McDuffie has appeared as soloist with most of the world’s major orchestras, including the New York and Los Angeles Philharmonics; the Chicago, San Francisco and St. Louis Symphonies; the Philadelphia and Cleveland Orchestras; and the Leipzig Gewandhaus Orchestra, the North German Radio Orchestra, the Düsseldorf Symphony, the Frankfurt Radio Orchestra, the Hamburg Symphony and Orchestra del Teatro alla Scala.

Founder of the Rome Chamber Music Festival, Mr. McDuffie holds the Mansfield and Genelle Jennings Distinguished University Professor Chair at Mercer University in his hometown of Macon, Georgia. He plays a 1735 Guarneri del Gesù violin, known as the “Ladenburg.”

Linden String Quartet
The Linden String Quartet is one of the country’s premier young string ensembles. The quartet will perform works of Haydn, Mendelssohn and Tchaikovsky on May 15 as part of the Spring season of the Amelia Island Chamber Music Festival. The 7:00 PM concert will be held at St. Peter’s Episcopal Church at 801 Atlantic Avenue in Fernandina Beach. Tickets are $40, which includes a post-concert courtyard reception where concert-goers can meet the Linden musicians, and can be purchased at www.aicmf.com or by calling the Festival box office at (904) 261-1779.

Praised for its “remarkable depth of technique and brilliantly nuanced, sumptuous tonality” by MusicWeb International, the Linden has enjoyed remarkable success in the four short years since its founding. The ensemble won the Gold Medal and Grand Prize of the 2009 Fischoff National Chamber Music Competition; the Coleman-Barstow Prize at the 2009 Coleman National Chamber Ensemble Competition; First Prize at the 2010 Hugo Kauder Competition; the 2010 Concert Artists Guild Victor Elmaleh Competition; and most recently, the ProQuartet Prize at the 9th Borciani International String Quartet Competition. The highly decorated Linden String Quartet is the Graduate String-Quartet-in-Residence at Yale University.

Discount Tickets for Tourists
The Festival is offering special discounts on ticket packages for visitors in partnership with the Amelia Island Convention and Visitors Bureau. By presenting a valid confirmation number from any lodging establishment on the island, visitors will receive a 50% discount on all Festival ticket purchases during their stay.

Discounts, which cannot be combined, are available through the Festival box office. Student tickets are $10 (cash only) and available 30 minutes before any Festival concert, subject to availability. Students must present a valid student ID and proof of age under 25. One ticket per person.

Now in its twelfth season, the Amelia Island Chamber Music Festival will run from May 11 through June 2, featuring more than 50 acclaimed artists performing 12 concerts in such intimate venues as nineteenth century churches, an historic courthouse and what is described as Florida’s longest operating saloon. The Festival will also present a series of 4 free community concerts.

A galaxy of international stars will be showcased during the AICMF’s Spring season. In addition to Mr. McDuffie, other Festival headliners include violinist Chee-Yun, cellist Zuill Bailey, renowned symphony conductors and pianists Robert Spano and Donald Runnicles, and Grammy award vocalist Sylvia McNair. As part of its continuing education outreach, the Festival will host the Beth Newdome Resident Festival Artists, composed of graduates from the nation’s foremost conservatories.