Cherokee Princess Amongst my Most Cherished People

Cherokee Princess Amongst my Most Cherished People 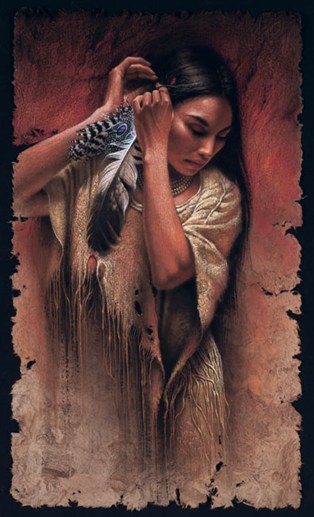 Before the Ceremony, By: Lee Bogle

There are many people of influence in my life. Many of them are beautiful women and I count them amongst my most cherished people. I often find myself running around doing the bidding of one or more beautiful women on a daily basis, and I find it to be quite fulfilling. Understand this is not an egotistical statement…simply a statement of fact. Beauty, as we all know is more than the surface attraction…it is a thorough and complete depth of spirit. In this collection of stories I hope to express my gratitude for this blessing, as well as sharing with you just how amazing these women are.

The first of these is a dear friend of mine named Cherokee Princess. Of course this breathtaking beauty has a real name but to me she is Cherokee. My life on Cumberland began in late fall or early winter….I have said before that our seasons are so much alike that the only real separation or difference between them are a few weeks of cold and several months of really hot. I sat alone on the third or fourth day of my residence at Serendipity…the river house where the staff of Greyfield live (see previous article) waiting to begin my mid afternoon shift at the inn. For several days I had been told about the person who would be training me…that person was off island for a few well deserved days of rest. That person turned out to be Cherokee who was off for her scheduled break and also to make the necessary provision runs that would satisfy herself and her boyfriend but also the inevitable list of various and sundry items that islanders often forget on their own hectic days on the mainland. For certain you can always depend on Cherokee Princess…you don’t get to be royal without some good hard work and dedication to your people.

Having said that I watched the clock ticking towards the one o’clock hour and I began to sweat. I had just found myself placed under employment on an island paradise and was facing the obscene humiliation of being late to work before a week had passed. It was three miles to Greyfield with scarcely half an hour to spare. Let me say here that if you could make that distance in “black and whites” and dress loafers then you are an awesome athlete. I however am not. I donned the only pair of gloves to my name. Red vintage seventies gloves as it were and set out to walk to work. I made it only a hundred yards or so when a van came barreling up the dirt road beside the airstrip. I waved frantically when I recognized the Greyfield van. I figured that at least someone could vouch for my effort to get myself to work when I walked in VERY late. The van crunched to a halt and the side door opened. I was met with the most charismatic and effervescent personality smiling to stop traffic. “Hey are you Philip” said the brown skinned lovely.” I thought you were a wounded hunter or something waving those red gloves like that”. I told her that I was indeed Philip, the new guy, and I was making my way to work. She then informed me that she was on the way to the Dip to pick me up, and drop off the morning shift employees for their break. The break, affectionately (or not) known as “the in-between” being the time between opening the inn and closing the inn when staff members are free to run around the wilder-land…. or sleep, as was often needed from late nights and early mornings….either from fun or work duties. At any rate Cherokee and I made our way back down the main road to the inn and thus began one of the most invigorating and revealing friendships born to me upon Cumberland’s shores.

For days I had been told that this girl was the most fun and the toughest trainer and the hardest worker. I had also been warned and briefed by those who would take responsibility for me and decide my fate as an employee that I had best watch out because there are those who can run ninety to nothing, still produce and those who would be lost in the inevitable wake. I knew in an instant of meeting Cherokee that if she would lead… I was man enough to at least try to follow. She took my breath away from vigorous stair climbing, room cleaning, giving house tours and hours and hours of uncontrollable laughter. Imagine if you will actually meeting Pocahontas or one of Charlie’s Angels in the real live flesh. That is sort of close to the intensity and beauty of this girl… young woman as it were but aren’t we all still boys and girls somewhere inside, however deep.

I was once told by several eyewitnesses of an event that is classic Cherokee and I will do my best to relay this episode. Apparently several staffers went to St. Mary’s for a night of fun and to visit family and friends. The local bowling alley found its way into the plans and the group was game. Understand that when you live in isolation, on an island in a self contained community… well a bowling alley is tantamount to a stationary circus waiting to happen. Cherokee walks in with her gear in tow. Imagine a young athletic obviously part Native girl in turquoise Capri‚Äôs, a white tank and a straw cowboy hat grinning from ear to ear. Yes quite hot and VERY intimidating. Well it seems that the bowling alley had just announced to the group that the bar was having a dance contest….my buddy turned around and told the cashier that she was looking at the winner when she caught sight of Cherokee. I am sure the cashier had heard a lot of big talk before and she was likely a bit less than agitated. At any rate our friends walk into the bar…certainly a shot or two to go along with the bootleg brews in the boat bag…and the following is secondhand as I have said…but no doubt accurate and classic as I know the Princess.

She walks in and surveys the floor…several girls and couples here and there dancing and grinding and booty shakin‚Äô in the way that you might expect to find in a small town bowling alley in South Georgia. Make no mistake southerners can move. Most of us would need a bit of encouragement to even step on a dance floor in an effort to actually compete…let alone try to WIN. Cherokee has not time for dilly dallying…she drops to the floor…kick-worms her way across the dance floor…pops up, struts for a second and then grabs a chair….that she turns around straddles for a Britney slash Madonna cowgirl jackride….gets up kicks away the chair and wins the contest hands down to a roaring crowd of onlookers. Understand? This girl is fun and exciting and energetic and a natural athlete. It is as if she were still a member of the tribe…and she spent her days running down game and pulling nets full of fish…entertaining the children around campfire to the delight of the council. Cherokee taught me a lot about myself…she still does today although she is married and has sailed away on her boat to the South Seas. We explored the riverbank at Racoon Keys for shark’s teeth hoping always for a giant intact megladon. She tried her level best to teach me how to surf…she made the most progress through great coaching and a common fear of predators. In fact more often than not as I laid flailing and flopping trying to get up…she would naturally catch the tiniest ripple as if the water turned on her command…and she would ride to my aid with encouraging words and easy tips. She always had a cold beer and a warm smile whenever I needed it and we laughed and cried together over the wonders and amazement that Cumberland brings to those who live and love the life on its enchanted shores. I know she is with me now until the wind fills the sails and her signature “woo-hoo” is heard again across the water.