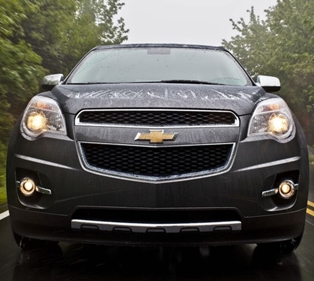 FERNANDINA BEACH, FL – The landmark 158-year-old Florida House here was selected by the Chevrolet Division of General Motors to feature the 2016 Equinox, its compact sports utility vehicle, and will be highlighted in the company’s new magazine “New Roads.”

The first issue of “New Roads” magazine was published this past spring. It is distributed to more than six and one-half million people, particularly Chevrolet owners, and contains a variety of lifestyle stories ranging from the obvious automobile articles to recipes, movie and travel features.

The Florida House was selected by Chevrolet for its durability, authenticity and historic significance.

“From what we’ve been told the evaluation process was extensive and rigorous and we’re flattered and honored that Chevrolet selected the Florida House as one of the four U.S. sites to introduce its 2016 Equinox,” said Ernie Saltmarsh, the hotel owner. “I know that our location in the historic town of Fernandina Beach on Amelia Island was instrumental in the company’s decision and together we all benefit.”

Describing the hotel in the article writer Bob Butz says: “After the Civil War, the railroad was finally completed and the Florida House Inn, now on the National Register of Historic Places and the oldest hotel in the state, became a playground for the rich. Vanderbilt, DuPont, J.P. Morgan and the Carnegies (who owned a home on nearby Cumberland Island) all stayed and hosted countless dinner parties here.

“The reason to visit the Florida House Inn is simple,” he continues. “Unless you get an invite to overnight at the White House, it might be impossible to sleep in rooms and wander through more historically significant halls.”

“This building has survived hurricanes, terrible financial periods and the Civil War with the rooms and the architectural details of the interior amazingly intact,” says Florida House owner Saltmarsh.

The article describes downtown Fernandina Beach while plugging the new SUV saying, “Downtown Fernandina Beach is also one of Florida’s great antiquing destinations, and with the second row of seats folded, the Equinox has an impressive 63.7 cubic feet of cargo space for that Blackbeard the Pirate mannequin you must have for your man cave.”

The Florida House was built in 1857 by David Yulee to house employees working on the cross state railroad that he was constructing to connect the Fernandina port with the Gulf Coast in Cedar Key. It was renovated in 2001 and brought back with its original historic features and to its elegant state in 2011 by Saltmarsh.

For information about the Florida House go to www.floridahouseinn.com. To view an online version of the New Roads Magazine Click HERE.