China’s Growth Powers the World – What Happens If They Falter? Part I

Given China’s importance in the world’s growth story, this is the time to ponder the Middle Kingdom and the potential for a stumble that could affect the markets. 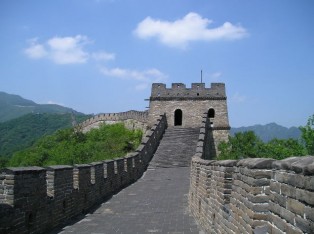 China's Great Wall, a remnant from another Imperial Era

As China’s phenomenal growth has vaulted it to a top position among the world’s economic powers, what are the consequences if their economic engine begins to falter?  Perhaps the more appropriate premise should be “when” rather than “if.”

For instance, a colleague told me a story that one evening back in June, after a long day of playing tourist in Shanghai, China, he flipped on the TV and was pleased to find CNN. After a few minutes, a story came on about Chinese artist and political dissident Ai Weiwei. That day, Weiwei was released by the government after nearly three months of detention for “alleged economic crimes.” Just as soon as the story about Weiwei came on the air, the TV screen went black. About 90 seconds later, CNN returned to the air in the middle of a new story.
Yes, TV censorship is alive and well in China!

“Toto, I’ve a Feeling We’re Not in Kansas Anymore”

China, of course, has been in the news for years as its economy has roared and moved the country to the second largest economic power behind the United States. Yet, for all its might, there are some glaring holes that might trip it up over the coming years – with media censorship being just one.

Given China’s importance in the world’s growth story, this is an opportune time to further ponder the Middle Kingdom and the potential for a stumble that could affect the markets. The United States has certainly managed to trip over its own economic shoe laces, so why should China be immune from a similar possibility? This is the first of three stories.

China’s surge is really a case of déjà vu. For much of recorded history, China was the world’s largest economy. Even into the early 1800s, it accounted for 30 percent of the world’s GDP, according to The Economist. But, like many empires before it, China spectacularly flamed out over the next century. By the mid-1970s, the disastrous reign of Mao Zedong had come to an end and China was near rock bottom.

In 1978, new leader Deng Xiaoping laid out a vision of economic reform that has propelled China to unprecedented growth. Since then, China has massively reshaped the world order as its growth and demand for resources affects everything from auto production, to corn prices, to funding the U.S. budget deficit. Earlier this year, China overtook Japan as the world’s second largest economy behind the U.S.
With that very brief historical background, let’s review some facets of China’s phenomenal rise and what that may mean for you. We’ll first look at demographics.

Incredibly, China’s GDP has grown at an average annual rate of 9.3 percent since 1989, according to Trading Economics. However, changing demographics could cause this growth to slow in coming years.

You may be surprised to know that between 2000 and 2010, the U.S. population grew faster than China’s (9.7 percent in U.S. vs. 5.8 percent in China, according to the Financial Times). For the past 20 years, China’s economic boom has been partly fueled by urbanization – rural folks moving to the cities in search of higher paying jobs, plus a supposedly endless supply of cheap young workers. As it turns out, that supply may be coming to an end.

Worse yet, the working age population will start to decline in about 2015, according to the United Nations. Fewer workers supporting a growing elderly population is not a recipe for economic growth.

Of course, China could reverse its one-child policy and rev up population growth, but that would likely cause other problems such as food shortages or environmental issues. As the demographic shift causes the labor market to tighten, wages have already started to rise, according to The Economist. That puts pressure on inflation and makes the country less competitive. While it’s easy to look at China’s growth over the past 30 years and extend it for another 30, changing demographics is one of several hurdles that could put the brakes on growth.

In our next installment we’ll look at the challenge of moving China’s economy from one led by exports and investments to one led by consumption. As a preview, we’ll talk about the perils of relying too much on infrastructure investments and how that could lead to excess capacity and bad debts.