When an old friend brought the original Chitty Chitty Bang Bang to town for the 2010 Concourse d'Elegance, my house was almost too small for the excitement this news created. When an interview and sitting in the antique race car became reality, I had to lock my door. 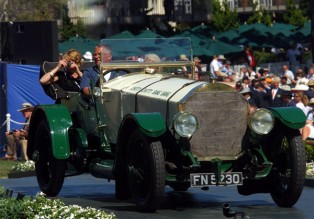 An old friend was on island this weekend for the Concours d’Elegance and had brought with him a Memento of the past named “Chitty Chitty Bang Bang”. When I told TJ she could do a camera interview with my friend’s Curator Jeff Orwig, who is in charge of his 70 plus car collection in New England ranging from 1901 to 2007, she almost lost it. For hours I heard her singing the movie’s song and Sunday could not come quick enough.

The movie with Dick van Dyke as Caractacus Potts and  Sally Ann Howes as Truly Scrumtious apparently made an enormous impression on her and quickly she informed all of her Facebook friends of the upcoming event.

What intrigued me was the real background of the 6 cylinder 1921 Mercedes, which was the second Chitty Chitty Bang Bang commissioned by Count Louis Zborowski. Of the 4 models produced in the early 1920s this is the only one that survived. The very large 18.8-liter Benz BZ IV unit that dwarfs most other engines ever created, is the reason why the race car was named Chitty Chitty Bang Bang . We asked Jeff to open the hood and if he would mind starting her up and yes….it surely sounded like a Chitty Chitty Bang Bang. Large, powerful and beautiful. The engine was traditionally used in aircraft but was deemed a suitable candidate to power this ultra-performance machine. The 230 horsepower engine was able to carry the car to speeds reaching 113.4 mph.  A short history on the 4 concept cars build by Count Zborowski can be found here.

Enjoy the video and stay tuned this week for lots more video and interviews from the 2010 Concours d’Elegance.