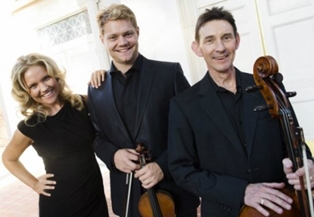 The Christiania Trio, composed of violinist David Coucheron, pianist Julie Coucheron and cellist Christopher Rex, will launch the Spring Series of the 2016 Amelia Island Chamber Music Festival on April 10th with music of Brahms and Schubert.

This 5:00 PM concert will be held at Prince of Peace Lutheran Church, 2600 Atlantic Avenue in Fernandina Beach. Tickets for this and future performances are available at www.aicmf.com or by calling 904-261-1779.

Violinist David Coucheron was the youngest concertmaster among any major U.S. orchestra at the time of his appointment at the Atlanta Symphony Orchestra in 2010. He has worked with such conductors as ASO Music Director Robert Spano, Michael Tilson Thomas, Mstislav Rostropovich and Charles Dutoit. Mr. Coucheron has performed as a soloist with the BBC Symphony Orchestra, Bergen Philharmonic Orchestra and Oslo Philharmonic Orchestra, in addition to playing solo recitals at Carnegie Hall, London’s Wigmore Hall and the Kennedy Center.

Julie Coucheron, David’s sister, has established an international career as a soloist and chamber musician. She has won first prize in all of the national competitions she has entered. Ms Coucheron has worked with Lazar Berman, Claude Frank, Emanuel Ax, Vladimir Feltsman, John O’ Connor, Elton John and Chistopher O’Riley. She has toured the world playing in such great venues as Verizon Hall, Wigmore Hall, and Carnegie Hall.

Christopher Rex, general and artistic director of the Amelia Island Chamber Music Festival, joined the Atlanta Symphony Orchestra as Principal Cellist in 1979, the same year in which he became the first cellist ever to win the string prize in the biennial Young Artists Competition of the National Federation of Music Clubs. Since then he has appeared as recitalist and chamber musician across the nation.

The Spring Series of the Amelia Island Chamber Music Festival will continue on April 16 with a performance by Amelia Island favorites Chee-Yun (violin), Andres Diaz (cello) and Wendy Chen (piano).