Coastal Cottage, Amelia Island's new home furnishings store, which is located in the Publix Shopping Center next to Staples, opened on November 22nd.

Pictured above from left to right are Melody Dawkins, Regan Westra, Dan Westra and Doug Oliver.

Coastal Cottage, Amelia Island’s new home furnishings, gifts and framing store, which is located in the Publix Shopping Center next to Staples, opened on November 22 once final inspections were completed that morning. Obviously, that was a sad date for the Nassau County Sheriff’s Department as well as the entire county. 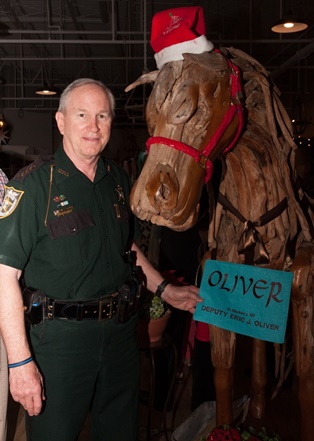 The store has a horse mascot and had held a contest to name the horse that ran through the end of November. The winning entry, submitted by Melody Dawkins, was selected; and the nearly life-sized teak driftwood horse was named Oliver, in memory of Deputy Eric Oliver.

On the night of the store’s grand opening in mid-December, the name was announced and a donation from the employees of Coastal Cottage was made to Deputy Oliver’s trust fund for his young daughter.

Coastal Cottage is open Monday through Saturday from 10:00 to 6:00 and the owners, Regan and Dan Westra, welcome you to come browse the store!