Fernandina Fishing reports included news of a 62 pound cobia that was caught at the south St. Marys jetties. 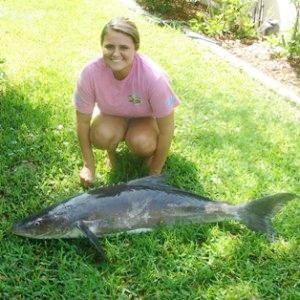 Our fishing party cleared the jetties off Amelia Island, Florida, around 11:00 am. Celebrating Luke’s birhtday, we were greeted by calm seas, sunny skies and high hopes of catching some really big fish! Fishing reports from the previous day included news of a 62 pound cobia that was caught at the South St. Marys jetties and it prompted us to carefully inspect each bouy marker all the way to the STM sea bouy. No cobia were found and a short ride later we were soaking squid and cut mullet at FB reef.

Immediately upon hitting the bottom of the sea floor, our baits were inhaled by hungry black sea bass. We were reeling them in two at a time! Every drop produced large seabass. Luke’s father alone caught at least 40! I had some live mullet in the baitwell and I pinned one to one of Luke’s hooks in hopes of digging a grouper from the natural structure 65 feet below. As I was unhooking a seabass from another anglers rig Luke shouted that he had a big fish and was struggling mightily to bring it up. When the fish finally made it to the boat I scooped it up with the dipnet and admired Lukes 18 lb. gag grouper. With sore arms he and his fellow anglers continued to catch seabass for several hours.

Another highlight was a pair of giant sunfish cruising past the Cleansweep boat.

On our return to Amelia we inspected the first set of bouys and discovered a cobia lazing next to a barracuda in the shadow of bouy #2. I tossed a live mullet in his general direction and he gulped it down in seconds, setting the hook. He ran around the bow of the boat and swam on the surface unphased then bolted toward the bottom in the direction of the bouy anchor chain. I applied a little too much pressure in order to avoid the chain, and with my jigging rod bent double and the drag singing, the knot between the flourocarbon leader and the braided line failed under the strain. We all gasped as the rod straightened and our estimated 60 lb. cobia disappeared into the murky depths.

The day was not lost as we caught fish all day and spent another great day fishing the waters off Amelia Island!