It is time for some cobia fishing around Amelia Island. I gaffed the big fish and stuffed him into the fishbox. 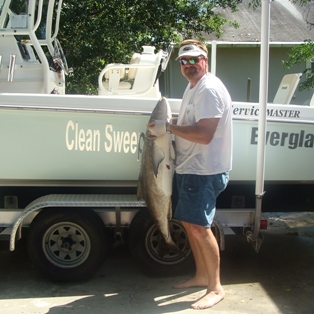 It is time for some cobia fishing around Amelia Island. Cobia show up annually in large numbers each spring heading north along our beaches and over reefs and structure offshore as well. On 20lb tackle they provide a strenuous workout and require some angler finesse to boat one, and if not deposited directly into a cooler or fishbox they can seriously disassemble numerous items aboard your boat.

Look for schools of Rays as Cobia like to swim in their midst, also check around channel markers and near bait schools. Our offshore reefs will hold good numbers of Cobia for all but the coldest months of the year.

Live or dead baitfish, live eels, squid and large Shrimp are enticing to these fish, but they will certainly chase trolled plugs, spoons or jigs when aggressively feeding. Be prepared to throw them a bait as they show up sometimes in small schools when you least expect them. 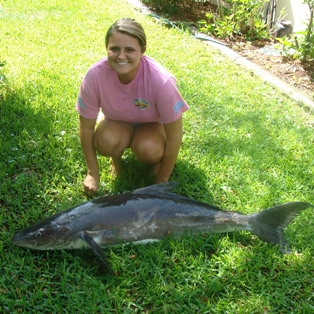 Last week we headed north aboard the CleanSweep boat to some numbers 14 miles off the Georgia coast and were in the process of boating Seabass, Flounder, Weakfish, and one sizeable Snapper which was released when a trio of Cobia attacked our bottom fishing baits. One was lost boatside, but the other which I estimated to be around 60 lbs. kept pulling out the locked down drag of one of our party members 4/0 reel. After a 15 minute struggle I gaffed the big fish and tried to stuff him into the fishbox. He went fairly quietly after his battle with our heavy boat rod and weighed in at 53 lbs on the Atlantic Seafood scales. By far the largest fish ever landed by our guests that day.

If you wish to tangle with bruisers like this call me!