Cruise ships have proven the value of Social Media in the new marketing mix with the Oasis of the Seas and now the Norwegian Epic. 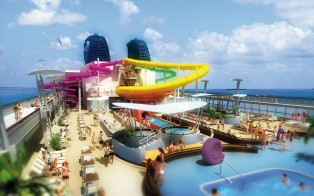 The Social Media are buzzing about the Epic's on-deck amenities

“The consumer is now in control,” said NCL’s Executive VP Andy Stuart. “You can ignore it at your peril, or you can embrace it in a way that makes sense and creates value.”
With the upcoming July 4th official launch of Norwegian Cruise Line’s newest cruiseship the Norwegian Epic, NCL has chosen the same social media marketing route that launched Royal Caribbean’s “Oasis of the Seas” launch 7 months ago into the biggest exposure phenomenon in the cruise history.

To baffle readers with some numbers:
• On the day the Oasis of the Seas sailed into Fort Lauderdale’s Port of Everglades for the first time, “Oasis of the Seas” was the most searched term on Google.com;
• In the days prior, while the ship was crossing the Atlantic from Finland, more than 200,000 people tuned in over any 24-hour period to watch video of the Oasis captain — more viewers than for example Anderson Cooper drew on CNN;
• as of this week, more than 14 million unique visitors have made their way to OasisoftheSeas.com.

If we compare apples to apples, the success of the Oasis media launch can be attributed to more than its status as the world’s largest cruise ship. It was and is the result of a calculated campaign to promote the ship mostly through social media channels, ultimately letting consumers drive the Oasis to the mainstream media.

Smart marketeers have realized that the media landscape has been changing drastically and the right approach is to be ahead of the curve. The cosmic shift in consumer driven exposure, coupled with the decrease in financial means for traditional media to stay ahead of the news with original reporting, has made social media the current Emperor of Exposure.

While the Oasis launch took social media use to the highest level to date, other lines have been quick to follow suit.
– Norwegian Cruise Line, launching its largest-ever ship, the Norwegian Epic, this weekend, is aggressively using social media channels such as Facebook and Twitter as well as an Epic microsite, all part of its broader social media strategy, while also using USA Today as the traditional venue with the largest internet presence.
– Holland America Line just launched a campaign on Facebook and Twitter titled “Countdown to Nieuw Amsterdam Launch.” In the 100 days before its July 4 delivery, the campaign is listing 100 reasons to sail on the newbuild. Itinerary-wise. This Sunday the ship will make its debut with a 10-night inaugural Eastern Mediterranean voyage with stops in Greece, Italy and Croatia. Nieuw Amsterdam will then sail a variety of 12-night Eastern Mediterranean itineraries roundtrip from Venice or between Barcelona, Spain, and Venice. These cruises will visit ports throughout Greece, Croatia, Turkey and Italy.

What all the cruise lines are embracing is the idea that social media can drive the conversation about their brands further and more widespread than ever. Take for instance the fact that it was clear that the Oasis’ size and features would create buzz, but social media in the US alone moved that buzz far beyond the 18% of Americans who have cruised, to media outlets that normally would not cover cruising.
Today’s approach, arguably an intermediate one, is centered around the philosophy of serving the “inline” media as broadcast, print and online, with online being increasingly the initial mover. Another clear example of that shift was the earthquake in Haiti in January when traditional media got their cues from Twitter messages. The World Soccer Cup currently played in South Africa is actually overloading the Twitter channels as another proof of the change.

Twitter is now called the “Best Push Button for the (Public Relations) World”. Everything that is communicated starts with a traditional press release and/or an online blog and gets pushed out with multiple tweets, facebook interaction and postings.
For the observant watcher it is obvious that lately brands even push their social media presence in their TV commercials as they invite the consumer to connect to their Facebook and Twitter presence as the in-between step to their website call to action.
The industry is moving so fast that even insiders are baffled.  Even though we, marketing specialists, still like to claim that “what starts online moves offline, and what starts offline goes online,” we are well aware that the speed effect is created by the consumer using the social media to push out the messages.

In the case of the Oasis, the website OasisoftheSeas.com was the central information portal, which used Twitter and Facebook to blast out information about the ship. Another important aspect of the viral success was of course the Contest attached to the launch which engaged the public far beyond traditional marketing. In the Oasis case it took courage from Royal Caribbean’s management to let a global naming contest decide on the ship’s name, an enormous departure from traditional marketing’s ‘celebrity baptism’ approach.

This social engagement with audience and future customers became a source for many other TV shows and online content, and it gave the public the opportunity to participate in something they are not normally asked to. It was a fascinating exercise to collaborate with your future customers and vacationers on what the ship should be named based on what they perceived the ship to be.
People in the cruise niche successfully embraced an enthusiastic base of online supporters that can be tapped to spread their messages. The email data base coming with this approach is gold in terms of future marketing efforts as well.

Of course not every industry has the level of engagement that cruise companies have with their customer base, which on average spends seven days, 24 hours each day with them, which is a considerable in-depth experience. From there it is much easier to activate and properly organize and push the online conversation to a point where it can’t be ignored, even outside the cruise community.
By comparison and as an indicator how Social Media enabled the Oasis to attract far more coverage than the Freedom of the Seas did when it debuted as the largest ship in the world in 2006, the Oasis launch had a lot fewer media people onboard the ship, yet the news coverage was hugely bigger than that of the Freedom. And we’re talking “only” 4 years. Apart from coverage by ABC’s “Good Morning America,” not one TV station outside of Florida came onboard the Oasis. Yet 200 TV stations around the U.S. aired video from the Oasis website.

A fair conclusion is that the consumer decided what they wanted to see, and they pushed the Oasis on news platforms. That ability not only makes a social-media-savvy audience part of a brand’s marketing team, it also shows the future for any type of business that can create substantial social engagement with its customer base, potentially and established.