Cumberland Island has played host to many of the rich and famous. Daytrips from Fernandina Beach have to include a ferry trip to Cumberland Island to the north. This Georgia island has been made famous by the Carnegie's, the Johnson's and the Kennedy as their favorite summer resort island. It's mostly a National Park now. 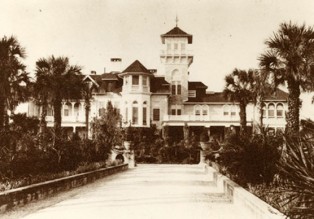 Cumberland Island has been a place for the super rich and famous for well over one hundred years.  Families with names such as Johnson, (Johnson and Johnson) and Carnegie to name a couple have spent many millions of dollars on the Island building their individual mansions.

John Kennedy Jr. got married on Cumberland Island.  I remember a back yard neighbor of ours who lived on six street, we lived on fifth and our backyards met.  Bertha was the cook on Cumberland Island and would always let us know who was visiting the Island and how important they were.  I guess Bertha was our living version of People magazine, we got the inside scoop of the rich and famous.

The Carnegie family had a beautiful mansion named Dungeness.  I can remember in 1959 standing on the the city docks with my parents looking at the orange glow in the sky to the north, Dungeness was burning.  Today you can visit the ruins of this once beautiful mansion and it is not hard to imagine the splendor once enjoyed by the Carnegie family.  There have always been rumors of how the fire started.  Some say it was arson and others say not, I only know it was a shame that it burned. 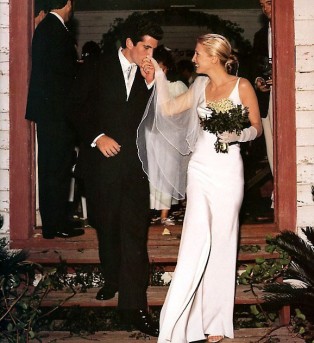 The JF Kennedy Jr wedding in the chapel

Another beautiful mansion is Plum Orchard.  I was invited one summer to visit this beautiful place and was taken with the large indoor swimming pool.  I confide that as a kid I thought this was the best thing on earth.  We would swim most of the day and had a great time swinging out over the pool on a rope creating huge splashes when we let go.  Plum Orchard still holds it’s beauty to this day.

John Kennedy was married on Cumberland in a small wooden church, for the most part this was kept a secret from the public.  If only Bertha was still alive I would have known months in advance.

If you have never visited Cumberland Island I suggest you make that a to do on your list.  You can catch the boat to Cumberland from St. Marys Georgia, plan to spend the day and enjoy the natural beauty and sights that Cumberland has to offer.