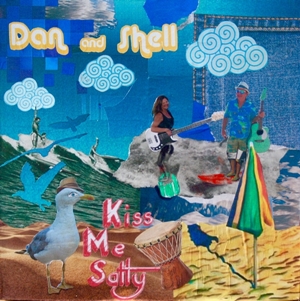 Wisconsin native Dan Voll has been playing guitar since he was nine years old. He studied guitar in Los Angeles with esteemed recording artist Ted Greene and was honored with several top music awards and countless accolades while living in Rockford, Illinois.

Known for his dazzling instrumentals and soulful vocals, Dan’s versatility is second to none, easily blending and crossing genres including rock, pop, blues, jazz, country, Latin and world music.

After moving to Fernandina Beach, Florida, in 2010, Dan could be heard playing regularly on his own and along with several acts and became one of the most popular guitarists in Northeast Florida. It was a chance meeting that led to his partnership with Michele “Shell” Anders in the summer of 2011.

Hailing from Pennsylvania, Shell played bass and sang in cover bands in central Pennsylvania, and the Maryland and Delaware beaches, before moving to Florida in 1999. As her career took a turn towards radio broadcasting, Shell put her musical aspirations aside and enjoyed popularity on the air waves in Jacksonville, Florida, only picking up her guitar and singing for friends and family.

Soon after meeting, the two began playing music together and a wonderful friendship was born. Dan and Shell can be seen and heard all over Fernandina Beach performing an entertaining mix of covers and now their own original music!

With beachy undertones and catchy lyrics, their new CD, Kiss Me Salty makes a fabulous addition to the music collection of anyone on your list.

Dan and Shell will be performing Saturday morning at the Fernandina Beach Market Place farmers market on Christmas Eve in historic Fernandina Beach, from 9:00 a.m. to 1:00 p.m., if you’d like to see these two perform, or perhaps pick up a CD or two.