Did the Internet delete one P from the Marketing Mix?

The battle between Netflix and Blockbuster is long from over if Blockbuster decides to rise from Bankruptcy as an online-only entertainment company. 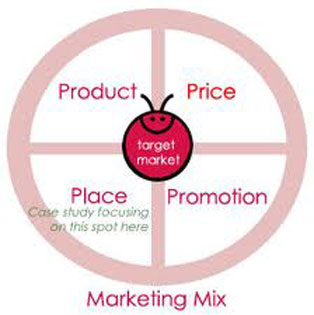 Location, location has been a widely adopted keyword chain for every traditional brick-and-mortar business in the economy since the industrial revolution began.
Brick-and-mortar stores could (can) always differentiate from the competition through location. That’s why national chain stores in shopping malls group themselves with other ones that have proven to work complementary to their assortments and inventories. A restaurant downtown, in most instances, will make more money than the same chain in the middle of nowhere or next to an Interstate. Just compare the Cracker Barrel business model to Applebee’s for example.

With prime locations, business can or could overcharge to gain an edge.
In the marketing mix of 4 P’s (product, price, place and promotion), the one P for Place translates into Distribution/Location. But with the Internet, there’s no location. Everyone stands on a level playing field. Hence, price becomes the primary competitive tool. When competition occurs through price, margins are naturally squeezed. No one can overcharge based on location or convenience when another competitor is only a click away.

I was thinking about this last night while watching a movie we had rented several days ago from the local Blockbuster store. Usually we take a quick trip to a RedBox these days if we want to watch a movie, while still maintaining a membership to Blockbuster. The once video giant is a skeleton image of its former success and online competition is expected to force their brick and mortar operations out of business, sooner rather than later.

The brick-and-mortar video stores such as Blockbuster, Hollywood Video, and Movie Gallery are all on their way out. Blockbuster has has dropped to penny stock status at 14 cents per share, while Netflix has a roaring share price of $139.
Blockbuster may not make it much longer as a storefront, but… I see some of these companies arise from the ashes of bankruptcy as  an online-only business and compete with Netflix on the simplicity of the business model.
So before you all start moving towards Netflix (everybody loves a winner) I have a warning about Netflix that will hurt its business model down the line.
After the brick-and-mortar stores exit the picture, new competitors will arise. And that’s where the problem comes in.Yes Netflix has an innovative business model, but it is also an extremely replicable model. Unlike Amazon and eBay where loyalty is created through interaction rating systems, Netflix has no customer loyalty program.

The more smooth transactions you perform, the more other buyers and sellers trust you. Hence, the longer one uses the site, the better the interaction. If the customer left for another website, reputational benefit would be lost. And reputational benefit is what counts if your business model is based online. Just ask my wife whose 3,000 plus perfect transaction record on eBay makes her final sales prices for identical items on average 50-60% higher than if it was offered by someone without this transaction record. Would she ever leave eBay for another similar auction site? Not likely, as her reputational benefit would be lost.
Secondly, the internet is a numbers game. Amazon and eBay with only a handful of users would not do well. Every time I do transactions via one of our Paypal accounts I am reminded that this eBay owned online banker has now 224 million account holders on the planet and growing by the minute. The larger the network  of loyalty, the better longevity.

Netflix lacks this key component. There’s no advantage to more subscribers. Sure, the company will have more movies with increased revenues, but this is a matter of inventory. That is not a networking effect but rather an economy-of-scale issue. Also, Netflix subscribers have no reason to stay on the site. If someone offered a better price or service, the customer would be gone. These missing foundations will become a problem in the long run.
This story is not necessarily about Netflix but about any online business model depending on longterm and massive loyalty building, because price and service are the main competing factors in a world otherwise equal.
Online an existing satisfied customer is your bread and butter bottom line in a rapidly changing economy.