The third and largest ship in the Disney Cruise Line is set to launch on her maiden voyage January 26, 2011. 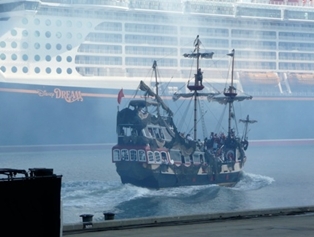 On January 19, 2011, a few pirates from Fernandina were privileged to take part in the christening of Disney’s newest cruise ship, the Disney Dream. The crew of the Black Raven from St. Augustine sent invitations via Facebook for pirates to arrive at Port Canaveral for the event. Waivers were signed and ID required due to the high security on the pier. For the many that were able to participate, it was an exciting, once-in-a-lifetime opportunity.

The Christening Ceremony was broadcast live via web cast and included performances by the Disney cast and Academy Award winner, Jennifer Hudson. The Black Raven, with a full crew of pirates from all over the state, sailed past the Disney Dream to “battle” the Disney pirates on stage.

After a speech by the President and CEO of The Walt Disney Company, Robert Iger, a helicopter lifted a huge bottle of champagne and ceremoniously christened the vessel by breaking it over the bow.

The third and largest ship in the Disney Cruise Line is set to launch on her maiden voyage January 26, 2011. The Disney Fantasy, a sister ship to the Disney Dream, is coming in 2012.