Feature, In the News

Experienced adults were more than twice as likely to crash or have a near miss when dialing on their cell phones. 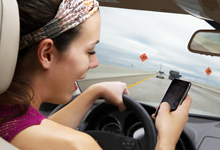 Video technology and in-vehicle sensors showed that distracted driving, especially among new drivers, raises the risk for car crashes and near crashes. The study also found that drivers eat, reach for the phone, text, or otherwise take their eyes off the road about 10% of the time.

In the United States, about 6% of drivers are 15 to 20 years old, but they’re involved in about 10% of deadly car accidents and 13% of police-reported crashes that cause injury. Past studies suggest that doing something else while driving—such as eating, talking on the phone, or texting—raises the risk of a crash.

NIH-funded researchers analyzed the driving habits of both novice teen and experienced drivers. Vehicles were equipped with 4 cameras that recorded video whenever the cars were moving. A suite of sensors recorded acceleration, sudden braking or swerving, and other data.

Experienced adults were more than twice as likely to crash or have a near miss when dialing. However, other tasks were not linked to increased risk. The act of talking on a cell phone didn’t itself raise the risk among adult or teen drivers. But problems can arise if you need to reach for the phone to answer or dial.

“Anything that takes a driver’s eyes off the road can be dangerous,” says study co-author Dr. Bruce Simons-Morton of NIH. “But our study shows these distracting practices are especially risky for novice drivers, who haven’t developed sound safety judgment behind the wheel.”