Do bicycles have a future on Amelia Island?

As a bicyclist you learn quickly how dangerous it is to participate in traffic on Amelia Island. Operating a vehicle seems like a contest in multi tasking. 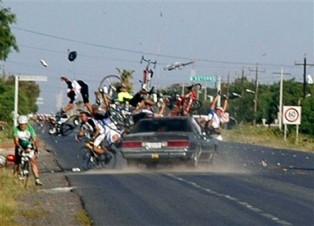 Bicycle riders have rights too

Frankly, there is no future for bicycles on this island, unless you’re like me and a couple of other daredevils who just by sheer concentration survive every day.

I was not going to write this story, although my wife had already warned me before I bought a bike just over two months ago. She was, as usual, ahead of me in the decision to seriously start taking care of our health. It’s a crazy jungle out there she mentioned about daily. People in cars simply don’t see you. They are always doing something different than watching traffic. We wrote about bicycle safety a year ago, but little did I realize that riding a bicycle on this island is putting your life in the hands of some very incompetent and careless motorists.

But today broke the camel’s back for me as I biked from First Ave to Club 14 near the Theater for my daily workout. Let me make this short and simple. Everyone over 75 should voluntarily or otherwise be forced to hand in their driver’s license and take a taxi service or relative for the remainder of their earthly transportation needs. On my relative short ride I cannot count the times that I have to go fully on the brakes because septuagenarians and their elders in 1985 Cadillacs and Lincoln Towncars stop their monsters right on the bicycle pathway, as if they never encountered something like a bicycle.
Of course you may think this is a harsh verdict, but I can tell you one thing, drive a bicycle and you’ll really see what all people do when they are behind the wheel of a car. From the woman driving out of the postoffice parking on Sadler who has a cellphone to her ear, while sorting through the mail she just picked up, completely oblivious to her surroundings and other participants in traffic, to the 82 year old man with handicap stickers all over his vehicle stopping in the middle of the roundabout.
Earlier I saw this 40-ish woman leaving the Walmart parking lot. As she is in the process of dialing a number on her cell phone she uses her knee to make a turn and bashes straight into several shopping carts….AND KEEPS GOING.  As a bicyclist you want to be as far away from these people as possible.

Today I counted the times people stopped dead on the bicycle crossing while forcing me to a complete stop or not even bothered to give me the right of way while turning onto the intersections or into parking lots. The count was 23 and that is scary.

But until today I thought it was a problem of elderly drivers. Well, not so anymore. One of Fernandina’s Finest came out of the Doctor’s Office parking on Citrona as he completely ignored me approaching on my bike, stopped long enough on the bicycle path to force me to a complete stop and without even looking for traffic on the road to his left turns right onto Citrona, never acknowledging the bicycle.

Inward my mind silently cursed him to Kingdom Come, but outwardly I just shook my head as I knew right than and there, that bicycle riding on Amelia Island will never become a mainstream transportation, because motorists have absolutely no respect nor a clue how to deal with that phenomenon, which would result in too many accidents.
For now I just keep on alert, but sometimes I’d like to park my bike into a car’s side door and scratch some paint cover. The way it is however, I probably would be found guilty.