In 2000, an Australian man met his maker while shooting ducks from his boat. The man was seated on a tiny dinghy... 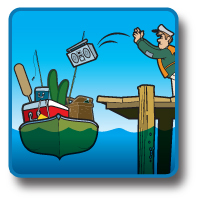 Don’t overload your boat unless of course, you have a death wish. If you want to stay afloat, you’ll need to do a bit of math according to the list of Darwin Boater Awards as compiled by SafeBoater.com. Avoid capsizing by following the load restrictions of your craft. This includes not only the number of passengers, but also the weight of your gear.

And the Darwin Award goes to…
In 2000, an Australian man met his maker while shooting ducks from his boat. The man was seated on a tiny dinghy. This diminutive boat was rated for the weight of three adults. This man, however, had weighed it down with 4 adults, one child, and three large crates of duck ammo.

To reduce the weight, the man had the brilliant idea to throw non-essential items into the back of his car. Unfortunately, his idea of “non-essential” turned out to be the lifejackets and safety equipment. When the boat capsized, the men drowned quickly, as they were also wearing waders that filled with water and acted as anchors. Two adults survived, but the remaining two men and the young child all died that day.

The Bottom Line: Don’t overload your boat… unless you have a death wish.