Mouth of Amelia has announce three more concerts of the tenth season of the Amelia Island Chamber Music Festival. 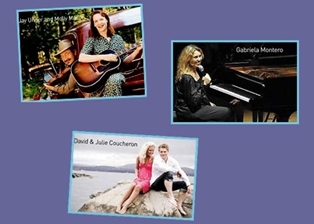 Mouth of Amelia has announce three more concerts of the tenth season of the Amelia Island Chamber Music Festival.

“Since joining forces in the late 1970s, Jay and Molly have become one of the most celebrated duos on the American acoustic music scene with their repertoire of Appalachian, Cajun and Celtic tunes, Civil War classics, sassy songs from the golden age of swing and country walzes.” Join us for a bit of Americana, hoedown style!

An Evening With Gabriela Montero

Venezuelan-born superstar pianist Gabriela Montero has been called the “queen of improvisation.” This program will include her signature improvisations on the music of several Latin American composers in the form of tangos, milongas and swinging dance rhythms, as well as music from other well known classical composers.

Brother and sister, David and Julie Coucheron, have performed as a duo around the world. David, concertmaster of the Atlanta Symphony Orchestra, has soloed with many of the world’s leading orchestras. Julie has won first prize in all the national competitions she has attended and has toured throughout the US, Europe, South America and Asia. They will perform music by Grieg, Kodaly and Beethoven.

FOR FURTHER INFORMATION on these and future concerts in the season and to listen to a taste of beautiful chamber music, visit www.aicmf.com or call 904-261-1779.